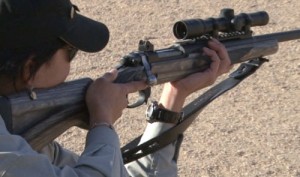 A couple of years ago Michael Bane, Dave Spaulding (2010 Law Enforcement Trainer of the Year), Ken Jorgensen from Ruger and Ed Head from Gunsite sat down in a conference room to put together the “wish lists” for what they called a “sport/utility rifle,” the heir to Col. Jeff Cooper’s scout rifle project. Steyr came out with their version years ago, but they missed a key element which is affordability.  The new Ruger Scout Rifle got this covered as well.