Marshal Halloway is the producer & editor of DOWN RANGE TV. He and Michael Bane founded DRTV in January 2007.

Marshal Halloway built DRTV from the ground up and launched it on Feb 3, 2007. He maintains the site together with his wife Marshal’ette (Teresa Heilevang). They are both in charge of the daily operations. They are also the owner of Down Range Media, a multimedia business covering shooting sports and personal defense.

From October 1, 2017, Marshal accepted a position as digital editor and category leader for Shooting at Outdoor Sportsman Group in charge of shooting related content for all their brands:

Marshal Halloway’s real name is Kjell Heilevang, but is better known as Marshal H. after his many years of promoting cowboy action shooting in the US and in Europe. 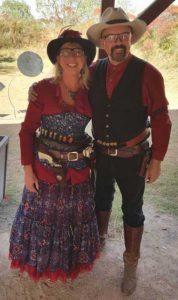 The Halloways attending a cowboy action shoot in Oklahoma.

He has been an active sports shooter since he was 18 with background in bullseye pistol shooting , Long Range Rifle, IPSC and Cowboy Action Shooting. He has also been involved in running local and national shooting organization. He has worked as a safety and firearms instructor for sports shooters and hunters and does one on one training on handguns through his company Down Range Civilian Defense.

He is an active 2nd Amendment activist and became an NRA member even before he moved from Norway and settled his roots in Kansas, where he lives with his wife Teresa aka Marshal’ette. She is an active partner in DRTV as an assistant editor and office manager.

Marshal H. is also known as the owner and editor of cascity.com, the longest living promotional site for cowboy action shooting.

He has used the Internet as a marketing tool since the early 1990s and know the Internet better than most, both in terms of networking and marketing.

Many small businesses have succeeded on the Internet with the help of Marshal Marketing, a consulting business he ran for 10 years, before he devoted all his time to Down Range Television.