The Jessie Abbate Sweepstakes Are On 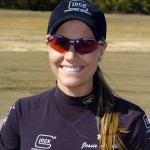 Now that the women’s division shooting powerhouse has said auf Wiedersehen to the Haus of Glock, the question is who will grab her up. She tops the list of women shooters currently unaffiliated with a gun company and, excluding Bob Vogel, the list of all shooters without direct gun company sponsorship. Here’s my read on who among the big handgun companies could, would and should grab her and why.

Smith & Wesson…This is the obvious #1 choice. If I were Paul Pluff, or hell, Mike Golden for that matter, I’d be hell bent for election to sign Jessie. The 158 year-old juggernaut has already assembled a very strong shooting team, the largest of any firearms company. They are still smarting from having lost out on Max Michel who went to Sig due to bad timing with S&W’s budget year. But they are just about to enter their new fiscal year so the timing for Jessie if perfect. With Jessie they immediately pick up national championships in Production and Limited-10 in USPSA and the Steel Challenge. Team her up with Julie G., who’s not yet fully back on her game due to rotten Montana weather and those full-time mommy duties, and they have a serious women’s one-two punch that extends well beyond the shooting range. Each is great on camera and can represent the company in public better than most sponsored shooters, and with a company like Smith which so closely manages their public image for their investors, this matters a lot. If Smith picks up Jessie then in doing so they’re firmly planting their flag on top of the hill, daring anybody to try and knock them off. Imagine the 2011 IPSC World Shoot with Jessie, Julie and Kay Miculek. Can you say Gold Medals?

Sig…This company finally got into the competition world with Max Michel who promptly won the USPSA Open Nationals and the Steel Challenge. He’s a lock for both titles in the future. They have quietly sponsored other shooters but so quietly you’d never know they were out there unless you saw them on the range at the match. If two of your shooters finish in the top 5 but you don’t mention them in any press release, did they shoot the match? With Jessie they’d have wins to talk about on a consistent basis. For Sig, Jessie would bring titles in Production, Limited-10, Steel Challenge, Single Stack (if she wants) and Open if they build a Sig Open gun for her on an STI body.

Springfield…The Illinois based company seems content to continue with Robbie Leatham as their standard bearer. Their lack of interest in other potential shooters, beyond Robbie’s wife Kippi of course, suggests they plan to stick with Robbie alone until the day when the battery on his electric wheelchair gives out. With Jessie they’d play in Production, Limited-10 with their XDs, which have yet to grab up market share in these divisions, as well as Single Stack and the Steel Challenge. Again, build out and Open gun and you pick up wins there as well.

FNH…The focus for FNH has been their 3-Gun effort. While Jessie isn’t seen as a 3-Gun shooter, she is an exceptional Cowboy Action Shooter where they run three guns. It’s an easy transition for her as she’ll be good no matter what she shoots. Get her shooting the FNP series in Production and Limited-10 and FNH might be taken more seriously in pistol competition where they are more scarce than Berettas.

Taurus…Now this one is a true wild card and would never happen but with their 1911 and 24-7 they have guns that could compete in Single Stack, Production and Limited-10. Grab an STI and rollmark the slide with the Taurus bull and you’d have an Open gun. This isn’t as far fetched as it would sound considering that it was rumored a couple were made for Doug Koenig’s use way back when he had some sponsorship connection to the company.

Beretta…It is said that 85% of Beretta’s business is in shotguns which would explain their limited focus on handguns over the years. Very few competitors run the Italian-designed pistol in competition so it is unlikely this would happen. Jessie would probably be less interested in them than they are in her.

CZ…This is a wild card that should not be. CZ has some good shooters and a very good gun for competition. Unfortunately it has not invested more marketing effort into competition. It would be a bold move on CZ’s part to snatch up Jessie and outfit her with a model 75 tuned-to-win by Angus. CZs are strong in Europe so they are proven winners in competition. Put one in Jessie’s hands and they’d be proven winners here too.

Of course, I could be completely wrong on all this but that’s how I see the lay of the land. Let’s sit back and wait for the news.

16 Responses to The Jessie Abbate Sweepstakes Are On