I suppose if you were really cheap, you could stick your pocket pistol into a small plaster freezer bag in  your pocket…it’s keep it clean, but it wouldn’t’ do much to position the gun for the draw! Seriously, I have seen some “interesting” home-made attempts at a pocket holster, the most creative made with expired credit cards. 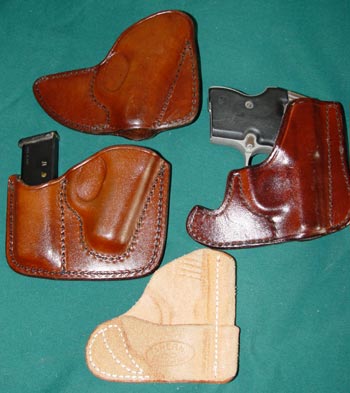 Unless you’re headed for summer camp and need a craft project, I strongly suggest that you avail yourself of one of the many excellent pocket holsters out there. For the little revolvers, there is no better buy than the DeSantis Nemesis…it’s $20 bucks, works great and is indestructible. I have one Nemesis I use for all my small frame revolvers. The cool thing about the Nemesis is the outer material is almost sticky, which means it stays in position — and in your pocket — when you draw the gun.

I have a couple of leather DeSantis pocket holsters, and they all work exactly as billed. If you aren’t familiar with DeSantis, they’ve been around since the Dawn of Time and still offer some of the best values in holster in the market.

The reigning king of all pocket holsters makers is Pocket Concealment Systems. Michael Meredith, who looks as if he should be starring in an episode of “CSI: Cleveland,” knows more about how things go into and out of pockets than any other living human…sort of like that “CSI” guy and his bugs.

The result is a wide range of pocket holsters, each specifically designed for a different sort of pocket. This is much cooler than you think…a Nemesis’ single weakness is that it’s tall and doesn’t work that well in some styles of denim jeans. Not a problem…PCS has it covered! 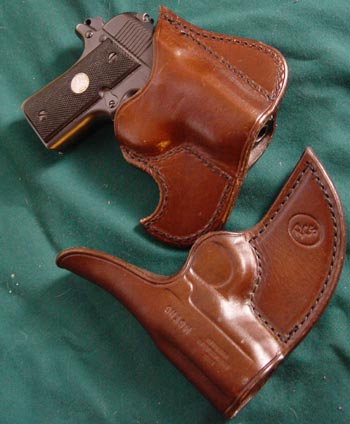 I have had a selection of their holsters for years, and they do exactly what Michael says they’ll do. They are beautifully made and one of the few leather holsters I’ve ever used that didn’t require a break-in period. I currently carry my .380 Colt in a PCS rig.

BTW, one of the few times in my life I have had to draw a gun in defense of said life, it was the .380 Colt from a PCS “sweater holster,” a cross-draw holster I wore in an appendix position under a sweater. For years I have heard that a “fast draw” wasn’t important for CCW carriers, yet when the time came, I simply outdrew a man who meant me harm. Interestingly enough, the loudest sound in the world is that of a safety being clicked off, and even though .380 is a classic “mousegun” caliber, the miscreant didn’t seem to notice as he threw his hands up and screamed, “I don’;t want this! I don’t want this! Don’t shoot me!”

Obviously, these aren’t the only pocket holsters in the world, Jerry Ahern used to make a great one, including a sleeve for that expired credit card or plastic room key you filched from the Holiday Inn to break up the gun’s outline,  except now he’s the President of Detonics and ‘way too busy to make holsters! I hear great things about pocket holsters from Robert Mika, a former LAPD officer who specializes in pocket gear…very popular with police detectives.

Several of my friends use the beautiful (and pricey) Kramer pocket holster and swear by it. It has a piece of laminate on the outside of the holster, so the outline of the gun is broken up.