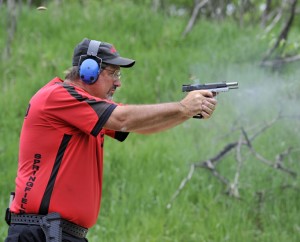 SEDRO-WOOLLEY, Wash. — It is said there are only two things in life that are certain, death and taxes. That may change now that Rob Leatham has won his 16th consecutive single stack national title, because there seems to be nothing more certain than Rob Leatham winning with a 1911 in his hands.

The Mesa, Ariz. resident and Springfield Armory shooter took top honors at the PASA Park ranges in Barry, Ill. by winning five of the 16 stages and posting a final score of 1122.9735 to once again lay claim to the U.S. Practical Shooting Association’s (USPSA) Single Stack National Championship.

“Rob has proven year after year that when it comes to the single stack 1911 pistol, he is unstoppable,” said Michael Voigt, USPSA president and runner-up to Leatham in 2009. “On behalf of the 19,000 plus members of USPSA, I extend my heartiest congratulations to Rob on another amazing shooting sports victory.”

Unlike past years when Leatham dominated the match from start to finish, the path to victory at this year’s match was more challenging with the second, third and fourth place finishers each taking a turn in the lead. However, all three fell behind and watched as Leatham took and held the lead through the last five stages of the match to win by a narrow 12-point margin.

Simi Valley’s Taran Butler, who finished third in 2009, won two stages in the match and finished second with a final score of 1110.2881. Phil Strader of Owasso, Okla. flirted with the match lead before falling to second place on the 11th stage and then falling to third place on the 14th stage. He finished 30 pints behind Leatham in third place with a final score of 1092.7056, up from his sixth place finish in 2009.

Hopewell, Va. resident Todd Jarrett, who shot for his own company, Strike Force Manufacturing,  took the early lead in the match only to fall back to again finish fourth overall for the second year in a row. Jarrett won three stages but finished 47 points out of first with 1075.8925.

Rounding out the top five was Shannon Smith of Tampa, Fla. who two weeks ago took second in the Limited division at the USPSA Area 6 match. Smith ended the match in fifth place with 1049.5325, putting him 73 points behind Leatham.

In the women’s category, Julie Golob of Glasgow, Mont. was crowned a national champion for the tenth time in her shooting career with her Ladies Single Stack National Championship victory. The Team Smith & Wesson captain dominated the women’s category, winning eight of the 16 stages and posting a final score of 812.9764.

Tori Nonaka of Woodbridge, Va. claimed the Junior Single Stack National Championship title posting the top score among the juniors with 736.9316. Nonaka, who is quickly gaining attention as an up and coming shooter, also placed fifth among the women.

And in the seniors category, Paul Hendrix of Jamestown, N.C. captured the top spot in the field of 56 with a final score of 880.2010.

The Single Stack Nationals was established in 1994 as the Single Stack Classic by pistolsmith Richard Heinie, and then USPSA Illinois Section Coordinator, Russell Cluver. The match was designed specifically for the 1911 model pistol and no other pistol design has been permitted in the competition.

In 2006, USPSA designated the popular match as a national championship. The name Single Stack refers specifically to magazine used in the 1911 pistol which holds just a single column of ammunition. The 1911 is one of the most popular firearms sold in America and the Single Stack National Championship is the preeminent showcase for the venerable 1911.