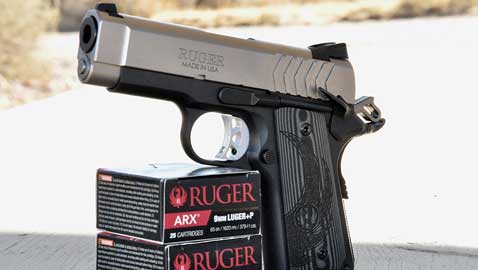 Have you wondered what’s going on at Ruger? While other firearms manufacturers are cutting back, drowning in debt and struggling Ruger has surged ahead to become the number one firearms manufacturer in the country, easily selling some two million guns a year. One of the many keys to their success is their corporate philosophy that new products drive sales. If you have been paying attention in recent weeks you may have noticed Ruger has introduced dozens of new models with many more to come. One new model is the SR1911 “Officers style” 9mm I have at hand and the subject of this review.

As you may recall, Ruger’s first foray into the 1911 market was a full size, stainless steel pistol in .45ACP – the classic 1911 and a good place to start. Since then they have steadily increased the lineup with a Commander size and lightweight Commander version and have expanded the caliber options to include 10mm and 9mm pistols. Full size target models in 10mm and .45ACP have been added, and in the past week or so a target model 9mm was announced. As far as I know they are far from finished designing and producing other 1911 style pistol variations, so if your favorite model hasn’t come out yet, stand by. 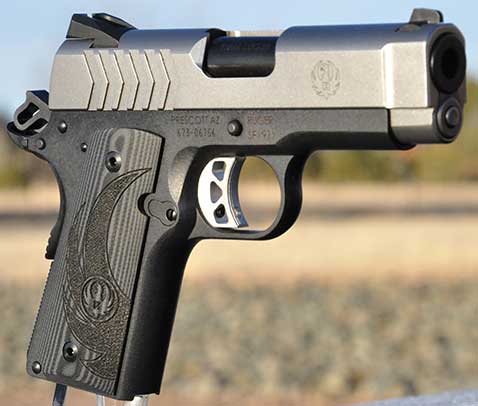 Ruger SR1911s are good to go right out of the box. By that I mean they have included most of the features you might want in a 1911 pistol and they do it at a very attractive price, often selling at retail in the $700-$800 range. The “Officers” model has an extensive list of standard features, to include genuine Novak three dot sights in Novak dovetails so they can be easily changed to suit your preferences, an anodized aluminum frame with a beveled magazine well and a new, rounded butt mainspring housing. The plunger tube is integral to the frame so it will never fall off or need to be re-staked and the beavertail grip safety, magazine release and thumb safety are all extended for ease of use. The trigger is standard length and it and the hammer are of the skeletonized combat style. The thin stock panels are of G-10 in a new, unique Ruger motif I find to be particularly attractive. Moving up to the stainless steel slide we find, like all the SR1911s it is a “Series 70” design, meaning there is no firing pin safety but a titanium firing pin and extra strength firing pin spring to make the pistol drop safe without adding unnecessary parts, complicating take-down and screwing up the trigger pull. 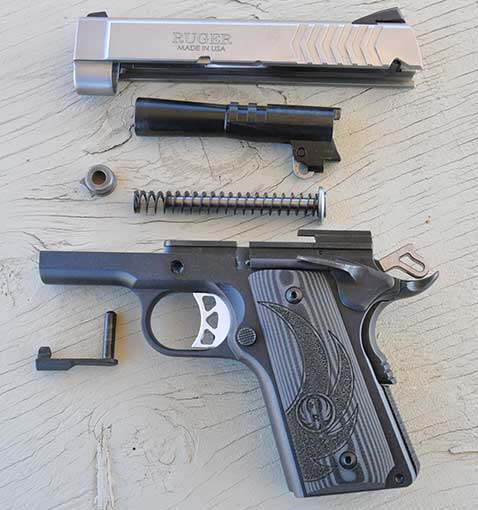 When Ruger started making lightweight aluminum frames they wanted to make sure they were durable. Unlike some manufacturers, Ruger fires hundreds of thousands (sometimes millions) of rounds through guns to ensure reliability. Initially testing a standard frame with a traditional barrel ramp they noticed that hollowpoint bullets were scratching and galling the aluminum ramp – this after thousands of rounds. That not being satisfactory they undertook to re-design the frame and barrel. The result was a fully ramped, coned bull barrel like the one this little blaster is equipped with. That means there is no barrel bushing; the 3.6” barrel achieves a solid lockup with a snug fit in the front of the slide. The barrel is Black Nitride coated for durability and to add a bit of slickness to help with smooth operation.

Because the barrel lacks a bushing the system requires a guide rod to contain the recoil spring. While the SR1911 manual that comes with the pistol covers all the other models with regards to takedown, this little pistol is a bit different so let me run you through it. If you’ve ever field stripped a 1911 and a Glock you’ll find it easy. First, unload the pistol by removing the magazine, locking the slide to the rear and physically and visually inspecting the chamber and magazine well. Let the slide go forward. After locating the half moon cutout on the bottom left side of the slide, pull the slide back until the rear tip of the slide stop aligns with the notch and push the slide stop out from right to left. After removing the slide stop pull the slide forward off the frame, turn it upside down and lift the recoil spring and guide rod out. Remove the barrel through the front of the slide after removing the recoil spring guide/retainer, a small circular piece residing in the place in the slide where a recoil spring plug is located in a standard pattern 1911. Easy.

Before shooting the baby 1911 I ran it through the “Wife Test”. This is something I do with pistols that might be suitable for, or are marketed to, lady shooters. I hand the pistol to several ladies, including my wife, ask how it feels in their hands, how they like the trigger and then ask them to run the slide as in loading or unloading, and finally, have them lock the slide to the rear. If they can’t manipulate the gun I conclude it is not suitable. In the case of this pistol, it passed the test but with a couple of comments. The ladies liked the thin stocks and the light trigger (breaking crisply at about 4.75 pounds) but all suggested the trigger should be shorter. Fortunately, this pistol uses standard 1911 parts so switching the trigger to a shorter one is an easy modification. ProShop Susan at Gunsite said the pistol would be perfect for her if it had the short trigger and a Gunsite low thumb safety (a thumb safety with a lowered shelf that allows the thumb to ride lower when atop the safety and makes the grip feel smaller). 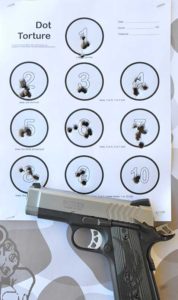 As is my habit of late I took the pistol out of the box and ran it through the 50 round Dot Torture drill. Dot Torture is a deviously difficult drill fired at only 3 yards with no time limits. What could be easier? Well, a passing grade is all 50 shots have to land inside a cluster of very small circles and there is an overwhelming desire to rush as you go through the 50 rounds. Anything less than perfect trigger control, sight picture and the application of the fundamentals of shooting usually results in failing Dot Torture. I’m happy to report I managed to pass but I was somewhat distracted towards the end because the slide wasn’t always going all the way forward, indicating a bone dry pistol. Digging around in my range kit I found a bottle of some sort of wonder lubricant, field stripped the pistol and lubricated it correctly. I fired several hundred rounds of 9mm hollowpoints, range ammo and premium defensive ammo afterwards. Curiously, 124gr. hollowpoint defensive ammo ran fine but a box of 124gr. full metal jacket “Match” ammo I had wouldn’t feed; everything else worked fine. Go figure. By the way, the two 8 round stainless steel magazines provided with the pistol worked great as did several 8 and 9 round full size 1911 magazines I tried. 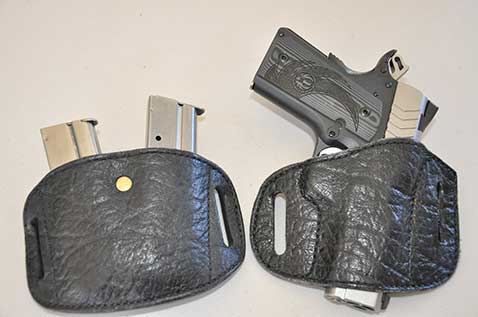 In case you’re wondering, this little 1911 fits just fine in holsters designed for “regular” 1911s. A favorite of mine is the CID design from Simply Rugged Holsters done up in Cape buffalo and this pistol fits it perfectly and looks great in it. And that leads to carrying this pistol and “what is it for”? Why would you want to carry a 1911 pattern 9mm pistol with a 9 round capacity when there are 10 and 17 round striker fired pistols available? Well, the 1911 is flatter, lighter and easy to conceal and nothing, and I mean nothing, beats a 1911 trigger. I don’t know about you, but personally, I won’t stuff a striker-fired pistol in my waistband and I refuse to carry one in the appendix position. This pistol, however, with its thumb and grip safeties is perfectly safe as far as I’m concerned. This pistol shoots softly and I would recommend it to ladies and beginning shooters, as well as manly men. As a matter of fact, with a handful of extra magazines it would be a joy to shoot though a Gunsite pistol class. See you on the range?