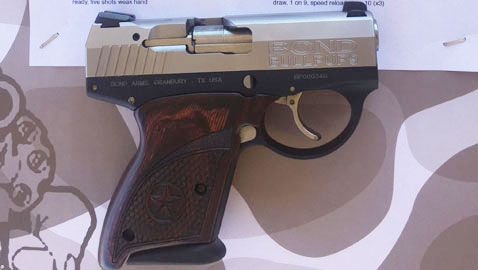 If you’ve been round the firearms business for a couple of decades you may remember the curious XR9-S pistol made by a company called Boberg Arms. The Boberg pistol was an attempt to make a small, compact 9mm pistol of bullpup design. Bullpups, as more often seen in rifles, move the chamber and magazine to the rear, thus allowing a standard length barrel to fit in a shorter, more compact package. The Boberg failed commercially for a number of reasons, not the least of which were a price around $1400, the need to apply a large dollop of messy, black grease to the internals and the tendency to pull cartridges apart, thus dumping the gunpowder into the goo. Even with proper ammunition, the Boberg needed to be re-greased every 30 to 50 rounds, a messy process most shooters would rather avoid.

Enter Gordon Bond, owner of Bond Arms and the producer of the finest double-barreled handguns on the planet. A genuinely nice guy and a manufacturing genius, Gordon bought Boberg Arms almost two years ago and set about turning the troublesome little pistol into one that actually works – the Bond Arms Bullpup9. He discovered all sorts of things about the original design that needing improving, like a lack of heat-treating in critical parts, and found a super slick aerospace metal coating to eliminate the need for the objectionable grease. If you’ve 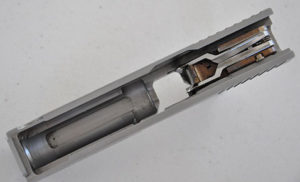 handled some of Bond’s other handguns you’re sure to be impressed by the beautiful rosewood stocks and the Bullpup9 benefits from the same treatment. The top end of the pistol is meticulously machined stainless steel and the frame is likewise machined from a block of aluminum before being anodized. It’s a good looking pistol that balances nicely in the hand. According to my postal scale the pistol weighs 18.9 ounces empty with the magazine in place and has a fully loaded carrying weight of 21.8 ounces with 7+1 rounds of Sig V-Crown 115gr. defensive rounds on board.

The trigger is a double action only design that weighs a little under eight pounds but feels much lighter, probably because it is so smooth and progressive – if I can use that term – meaning it doesn’t stack or get harder to pull before let-off. The reset is long because the trigger has to return all the way forward. The external hammer isn’t a hammer in the traditional sense but is more like a rectangular flapper. When Gordon showed me the prototype Bullpup9 I remarked that the magazine had no follower. Gordon smiled (he’s a nice guy, did I mention that?) and rather than call me a dummy, said, “That’s what everyone says.” Let me see if I can explain this 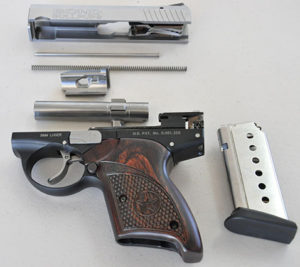 in dummy terms: Pretty much every pistol design you’ve ever seen is a “push feed”. When the slide comes forward it strips a round from the magazine then pushes it into the chamber. The magazine follower has a lot to do with how the cartridge is presented to the chamber and positioned under the extractor for feeding. The Bullpup9 magazine doesn’t need a follower because it’s a “pull feed” design. As the slide moves to the rear a claw grasps the rim of the cartridge, pulls it out of the magazine and positions it to ride over a feed ramp that pops up and guides the cartridge into the chamber as the barrel rotates and locks into place. I know, a little weird for traditionalists, but it works. Now, remember when I mentioned the design could pull cartridges apart? Some semi-automatic pistol ammunition has very little crimp, that being tension on the bullet imparted by squeezing the cartridge case near the case mouth. That’s because the ammo is designed for push feed pistols. The rapid movement to the rear of the Bullpup9 slide and claw can pull some of these cartridges apart so Bond has done a lot of testing and maintains an extensive list of approved ammunition that works in the Bullpup9. Of course, after perusing the list, I rummaged through the ammo bunker, found a factory round not on the list, and sure enough, the Bullpup9 pulled it apart. Cool! 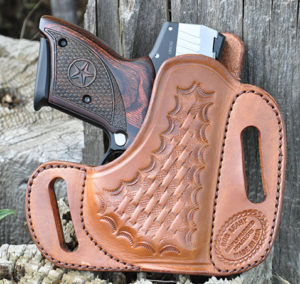 Have you ever noticed that pistols with longer barrels don’t flop around in holsters as much as those with short barrels? Well, they do and that makes designing a holster for the Bullpup 9 a bit of a problem. Fortunately, Rob Leahy at Simply Rugged Holsters has a deep understanding of how pistols need to fit in holsters and accepted the challenge of making me a holster for the Bullpup9. Compact, like the pistol, it’s a simple design optimized for concealed carry in brown leather with a bit of stamping for style points. Nice.

After shooting the Bullpup9 to get a feel for it and to see where the metal, drift adjustable, combat style 3 dot sights were hitting (dead center), I reckoned it was time to see if I could get through Dot Torture with the little blaster. Dot Torture is a seemingly easy drill because there is no time limit and you can shoot it at 3 yards. It involves slow fire, weak and strong hand shooting, drawing and reloading and takes 50 rounds to finish. Firing any one shot outside the little 1 7/8” circles means you fail the drill. I’m happy 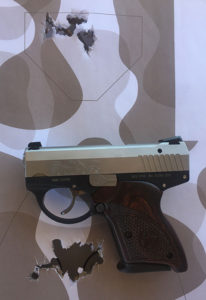 to announce I managed to pass Dot Torture with the Bullpup9. I used ball range ammunition to shoot the dots then switched to every variety of defensive ammunition I could come up with on the approved list. Firing combat drills like pairs, multiple targets, failure drills (two to the body, one to the head) and shooting steel at 25 yards, the Bullpup9 ran without a hitch. By the way, the Bullpup passed my “Wife Test”. This is something I do with small pistols designed for concealed carry. Starting with my wife then moving on to other ladies I ask them what they think of the aesthetics then have them dry fire the pistol. The crucial test is, can they run the slide and lock it to the rear?  The ladies all liked the Bullpup9 and every one of them commented on the light trigger, how nice the pistol looked and how well it pointed and fit their hands.

The pistol has a couple of quirks when compared to your economy plastic 9mm. The slide doesn’t lock to the rear when empty and because it pulls rather than pushes it won’t chamber a 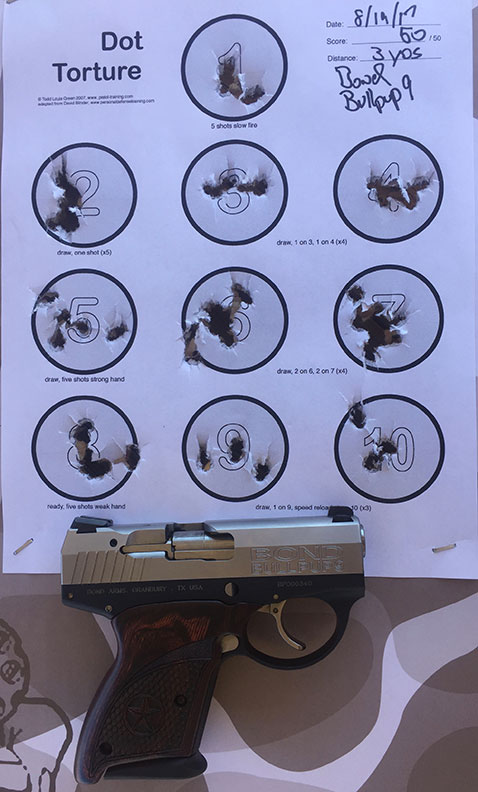 round if you let the slide go forward from a locked position. There is no separate slide lock; the slide can be locked to the rear by retracting it then turning the takedown lever to the 6 o’clock position. To be honest, I was a little reluctant taking the pistol apart because the design is so different. After reading through the manual and looking at videos (available online at the Bond Arms website) I steeled my courage and gave it a go. Without going into details, it’s actually easy to take apart and put back together – if I can do it so can you.

With a suggested retail price of $977 and production of only 150 guns a month the Bullpup9 isn’t for everyone. Those who appreciate high quality, fine workmanship and interesting designs will be attracted to the Bullpup9 and I rather imagine it will find a market with folks looking for a powerful, compact and reliable pistol for concealed carry. Good job, Gordon, I like your little pistol. I like it quite a lot, actually.