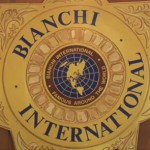 The Bianchi Cup has been held for 30 years now. It is one of the most lucrative of all the shooting sports tournaments originated from the law enforcement shooting community.
Since its inception in 1979, the NRA Bianchi Cup has retained its original course of fire, consisting of four matches: Practical, Barricade, Moving Target and Falling Plates. Speed and accuracy is the key to winning the Championship.

The Bianchi Cup is the brainchild of former police officer John Bianchi of holster maker Bianchi International and the late Ray Chapman – one of the original “Combat Masters” of International Practical Shooting Confederation.