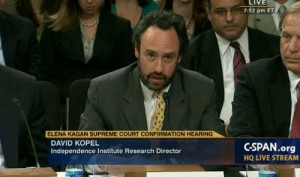 On July 1, 2010, outside witness testimony concluded the four day confirmation hearing of Elena Kagan to be Associate Justice of the U.S. Supreme Court.  Here is the audio of David Kopel’s oral testimony:

Video including including Q&A with Senators Sessions and Hatch is available here.

David B. Kopel is Research Director of the Independence Institute, a public policy research organization in Golden, Colorado, and is an Associate Policy Analyst with the Cato Institute, in Washington.

His latest book, Aiming for Liberty: The Past, Present, And Future of Freedom and Self-Defense, covers topics ranging from the origins of the Washington, DC gun ban to the Heller decision. He discusses the genesis of modern American gun control, the KKK, the true anti-gun agenda and the deceptions and errors used to promote anti-gun laws. He covers the right to self defense from Judeo Christian perspectives. Other chapters explore United Nations and International gun control attempts and failures, law enforcement abuses and solutions, the culture of the right to keep and bear arms and the gun control movement. He concludes his book with a chapter on several prominent American gun owners from Thomas Jefferson to Eleanor Roosevelt.