Last day at the NRA Show

What a fantastic turnout this year. Exact numbers are not in..but I heard that Saturday was a record breaker in attendance. 30,000 plus! Now you can’t make a statement like that to the anti gunners any clearer than that! Today Marshal and I didn’t have a lot on our plates agenda so we started out thinking we were going to have an easy day where we could be just ‘people enjoying the show’.

Wrong. We started at the far end of the wall and was going to up and down each isle. Got to the first booth and someone stopped Marshal and wanted him to talk to them about marketing on Down Range. After 15 minutes, we moved on down the line…only to be noticed and once again, stopped. Then a meeting was scheduled and my ‘shopping morning’ with my husband was suddenly put on hold. Understand I am smiling when I write this..as it just comes with the territory of Michael and Marshal…and the gun world.

Finally this afternoon we got to personally check all the cool stuff out that I had my eye on. Got some neat T-shirts.. a couple hats, a visor and a Safepacker Holster for my LCP from The Wilderness . 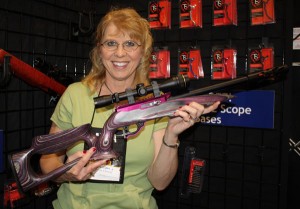 and just happened to casually have the guys come over to casually tell us that they can get a purple barrel ..purple scope and rings and mount to make it the puuuurfect purple gun that any girl would want. *grinning*  I think I did a fabulous job getting that point across to Marshal.  Another cool thing I saw was a Grandpa and Grandma that had their grandson at the Laser Shoot booth. They were letting him try his hand at shooting. 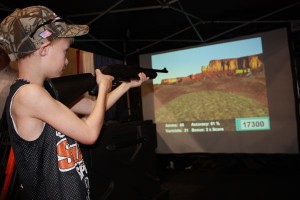 Now if I had one toy that I could put in my house it would be this one. There are so many challenges and scenerios to choose from. Everytime I stopped by, there was a line waiting to shoot.  I especially liked the part that shows you exactly where your shot goes~ Just like if you were shooting the targets or the live animals.

If I had one of these.. there would be no stopping me . I bet you I could even get good enough to beat Todd Jarrott. LOL  Speaking of Todd, he was at the Para-Ordinance booth doing demonstrations to a full crowd ( as usual). 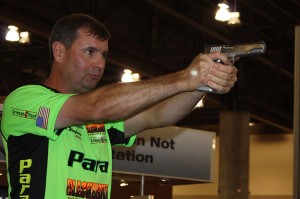 No matter how may times I see Todd, I still am compelled to stop and take in one of his demo’s. He always gives excellent tips and ways to improve the way you shoot and handle your firearm. By the size of the crowds that gather around him all the time I am not the only one that values and enjoys what he has to offer.

One Response to Last day at the NRA Show