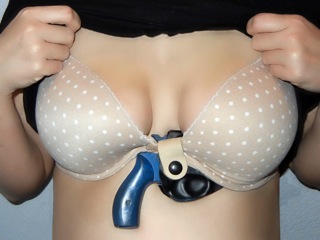 Oklahoma City, OK — Looper Brand is excited to announce a new development in concealed carry options for women. The Flashbang Holster (patent pending) is a thermo-plastic molded clamshell designed to snap in place over the barrel/slide and trigger guard of many small .380 pistols and j-frame revolvers. The holster then tucks up underneath the ladyʼs bra band where it is secured in place by both the band itself and a soft suede strap that snaps around the center portion of the bra between the bra cups. The open-bottom design of the holster allows the gun to be drawn simply by pulling straight down on the grip of the gun while the suede strap retains the holster. 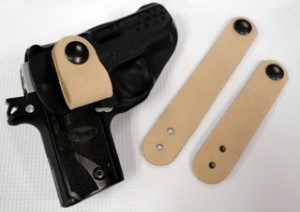 The Flashbang Holster comes with three straps of different lengths to accommodate the majority of bras. Each strap has a directional snap that allows the user to quickly put the holster on and take it off, but prevents the holster from being forcibly removed or knocked loose accidentally.

Because the gun actually rests partially inside the bra cup, the only portion that is visible is the grip. This makes the gun EXTREMELY concealable! Although a larger bust line makes concealment a breeze, simply choosing a shirt with a pattern on it, or wearing a shirt with a bit of ruching or fullness allows even a lady with a very athletic physique to comfortably conceal her firearm on her body.

In the event that it becomes necessary for a woman to draw her gun, she uses her weak-side hand to pull up the hem of her shirt, thus clearing the garment so that the grip of the gun is exposed and then pulls straight down on her firearm with her shooting hand. Because of the way the Flashbang Holster is made, the trigger guard is fully covered until the gun is pulled away from the body while at the same time allowing her a full combat grip on her weapon. This technique also presents the attacker with a major distraction (FLASH) while allowing the lady to access and utilize her defensive weapon.

The Flashbang Holster is available at either www.flashbangholster.com or www.looperbrand.com. Current gun fits include the S&W Bodyguard .380 as well as the Bodyguard Revolver, the snub nose j-frame revolver, the Kel-tec, the LCR and LCP by Ruger, and Sigʼs P238.