Update on the Rossi Trail Judge 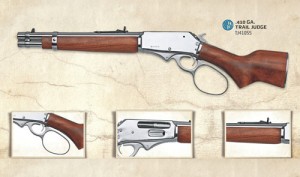 The April edition of American Rifleman named the Rossi Trail Judge as one of the top guns for 2011 and with a .45 Colt / .410 bore version. Because of the extra attention to the Rossi Ranch Hand this week, many have contacted us about the Trail Judge as a modern version of the Mare’s Leg and with some possible options of mounting a rail, a red dot or laser sight. Sounds cool and opens up for some interesting applications. Well, we have some bad news.

The Trail Judge was shown at the SHOT Show last January. It was a cut down version of the Rossi Rio Grande lever action and according to the 2011 catalog chambered in .410. We talked to a Rossi representative today and we can confirm that the Trail Judge will not be produced. So for those who are looking into a more tactical version of the Mare’s Leg, they need to look for other alternatives.

13 Responses to Update on the Rossi Trail Judge