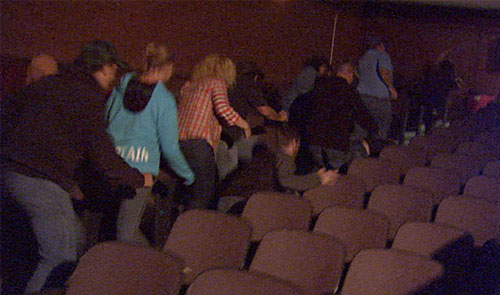 A defensive shooter’s nightmare – a crowd in panic – or something you could have avoided?

“I suppose it’s tempting, if the only tool you have is a hammer, to treat everything as if it were a nail…”

“The Law of the Instrument”
Abraham Maslow, 1966

Sure, it’s a cliche, but that doesn’t make it any less true. I actually prefer the earlier incarnation of the homily from yet another famous psychologist, Abraham Kaplan, who noted that, “Give a small boy a hammer, and he will find that everything he encounters needs pounding.”

So what does that have to do with concealed carry? After many seasons of SHOOTING GALLERY and THE BEST DEFENSE, I would say, “Just about everything.” As CCW has grown from a few citizens concerned with their personal defense into what I would contend is a national phenomenon, I see more and more people who think that every solution to a self-defense problem is a “gun” solution…hey, that’s what you’re carrying!

We need to move to a more holistic view of self-defense situations in the classic definition of the word, that is, a view of the more complete system rather than an analysis, or a dissection, into parts. Think of it this way… we’re much better at discussing self-defense caliber choice than we are at understanding how awareness and avoidance much earlier in the situation may avoid that violent confrontation in the first place.

This becomes very clear when you run simulations. THE BEST DEFENSE, which I co-host with Mike Seeklander and Michael Janich, two storied trainers, is built on sims. We study media reports of incidents, track them down, often discuss the situations with law enforcement, then model the incident for the show. We usually do a “good, better, best,” version of the simulation, which means that we’ve done more than a hundred simulations, not even counting the ones we’ve run for SHOOTING GALLERY and other shows.

That all might seem self-evident, but that’s not what we found in “debriefing” viewers. Instead, we became more aware that we needed to not only show shooting or empty hands or knife/stick skills, but we had step our viewers through awareness and avoidance skills as well. When we say, “Look for a developing dangerous situation,” we need to go on and say, “Here’s what you’re looking for” and, “Here’s where you should be looking for it.”

An example from our most ambitious simulation, modeling the Aurora, CO, theater active shooter situation. We rented a movie theater, gathered up an audience and ran the sim over and over again. What we found was, essentially, a worst case scenario for the CCW civilian:

So what kind of “take-aways” did we glean from the simulations? “Don’t go to midnight movie premiers,” Michael Janich suggested wryly. Well, there’s probably something to that. When I talked to the many self-defense trainers I count as friends, not a one of them was enthusiastic about big crowds, large public gatherings or “gun-free zones.” But the sim taught us that if we want to go to that midnight opening of the latest and greatest film, think about these points:

If the balloon goes up, no matter how horrific the situation, you must be able to quickly analyze the aggressor(s) and understand what your advantages are. For example, if the aggressor is wearing a gas mask, he or she has reduced peripheral vision, which can be an advantage for you. If the shooting as started, do not do what everyone else is doing! Remember, we monkeys are sight hunters; if everyone is running for the few exits, that’s where the aggressor’s attention is going to be focused. Go hard to ground . . . the metal stands of theater seats are arguably better cover than the backs. Find a crack where you have some view of the aggressor so you can track what’s going on. Do NOT pop your head up like a prairie dog! Remember, sight hunters, extremely sensitive to rapid movement. Quick, jerky movements will catch the aggressor’s attention and make you the bullet magnet.

One other important point to remember – all cover comes with a countdown timer attached to it. Violent situations are fluid, and chaotic, and unless you’ve stumbled on a WW2 machinegun bunker, your cover is not going to last long. You need to be planning your move to the next piece of cover!

Or lining up your line of attack. If you’re armed (and see how far down in this article that the hammer finally appears?), your ideal situation is to be able to target the aggressor without exposing yourself to fire. In simple terms, that means a laser for your CCW firearm. A laser allows you to place aimed fire on an aggressor from what we might term a “broken” position. By the way, if you find yourself in a situation where the aggressor appears to be wearing body armor, a good test is still several rounds fired center mass on the aggressor. At the very least, if he or she is wearing body armor, the pounding of multiple rounds into the armor can stagger or spin the aggressor (remember, you’re probably not fighting a trained Marine here), even knocking them to the ground, causing a lot of pain and giving you the opportunity for an aimed shot into a non-armored part of the body (head, side, under the armpit, hips, legs). If the aggressor stops immediately and falls to the ground, it wasn’t armor.

No simulation ever goes 100% the way we expect it to go. But that’s how we learn from these things.

You’ll notice I haven’t dealt with “gun-free zones” here. Every state’s law on posting premises for firearms is different…some of those signs carry the force of felony law, some are just a suggestion, if you will. I suggest you get a legal opinion on the subject for your location and make your decisions accordingly. Smart monkeys don’t go down to the watering holes when the lions might be hunting.

4 Responses to Understanding the Hammer