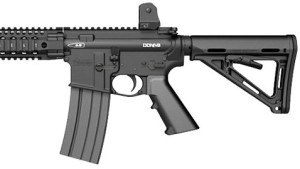 It’s Friday… and Colt is buying LWRC! If true, it makes a lot of sense for Colt, who has been pushing really hard to regain a toe-hold in the market it created. The most interesting thing to me is the “up from the grave” meme on the 6.8 SPC cartridge. I ran across a huge Washington Times article on the deficiencies of the M4 platform:

He said its 5.56-caliber bullet is too small and the gas-piston firing system is prone to stoppage. He said better weapons — the German Heckler-Koch G36 and Russian AK-74 (a version of the venerable AK-47) — use superior firing systems. “Frankly, this whole thing is scandalous,” Gen. Scales said. “We send soldiers into close combat with lousy weapons and we’ve done it since World War II and nobody complains. It’s a national outrage. “It has no penetrating power,” he said of the M4. “It’s ineffective against vehicles, against bunkers. It’s ineffective against virtually anything except a man in the open. Put a flak jacket on the enemy and it’s virtually useless.”

To be sure, we’ve heard all this stuff before…many, many times before. In fact, the 6.8 Special Purpose Cartridge was developed as part of the Enhanced Rifle Cartridge program to create a cartridge specifically to address the perceived shortcomings of the 5.56. And the 6.8 was and is a heck of a cartridge, doing everything it was designed to do.

It was also born into a political arena where the very idea of a major modification of the U.S. military’s primary weapon was flatly, totally, politically off-the-table. So the 6.8 languished as a commercial product…a side effect was the huge increase in the use of the AR platform in hunting, where the 6.8 excels. I was hugely impressed with the 6.8 heavy bullet performance on hogs.

Recent years have seen the rise of the .300 Blackout. Rather than go into it again, Nick Leghorn did an excellent job of explaining the difference between the missions of the 2 cartridges in this TTAG post form a couple of years back.

So LWRC does a huge deal with the Saudis on 6.8 carbines. All Outdoor reported after SHOT that the U. S. military was once again looking at the 6.8 SPC.

Bot the 6.8 and the .300 Blackout have their failings for a military context. The 6.8 SPC requires a different bolt, different barrel (duh!) and maybe most importantly a different magazine. Visualize how many AR/M-4 magazines there are out in the world…it’s roughly a gazillion bazillion, give or take a few million. Yes, the U.S. could issue a gazillion 6.8 magazines, but the AR platform is one of the most issued firearms on earth…might there be a battlefield problem there?

The .300’s issue is a little stickier. Since it uses the 5.56 case blown up to .30 caliber, it can use the standard AR bolt and magazine, a big plus. Occasionally, a .300 Blackout cartridge will chamber in a long-throated 5.56, followed by a very loud noise and flying pieces of metal, a big minus.

The best summation I’ve read has been in the Brit blog Think Defence from late last year:

It makes no sense to replace our small arms inventories now – not unless we foresee ourselves becoming embroiled in a major international conflict within the next five years.

That is probably the bottom line. Ironically, the real competition to the 6.8 in the commercial market is the rise of the now-perfected 7.62 AR-10 platform, as noted by AllOutdoor here. The .308 is a proven product, well known to American shooters and hunters and, overall, maybe the best all-around chambering on earth.