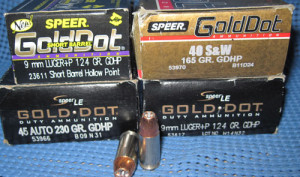 From the New York Daily News: “An off-duty police detective shot a 17-year-old mugger dead in Brooklyn Sunday after the youth attacked him with a cane, authorities said. The dead teen’s 15-year-old accomplice fled the scene but was later arrested, cops said. Police sources said Detective Benjamin Cintron, a 26-year veteran, appears to have used justifiable force in shooting Antoine White.
…..The officer takes out his shield and off-duty 38-caliber, five-shot Smith and Wesson and instructs White to stop and to drop it, meaning the cane,” Browne said. “(White’s) advancing on him. The officer fires once. The bullet entered and exited White’s left forearm then struck him in the left chest. He died at nearby Woodhull Hospital.” Read the entire article here.

The issue load for NYPD officers carrying a .38 Special revolver is the Speer 135 grain +P Gold Dot hollow point. This load was developed by Speer at the request of the NYPD to mimic the excellent performance the NYPD has experienced with their 9mm duty load, the 124 grain +P Gold Dot HP.

While New York is not exactly the Wild West, they do have their share of police shootings for no other reason than 7 million people interact with 35,000 police officers which combine to make a recipe for conflict. With that many people and that many cops, good and bad guys will cross paths resulting in shootings every year. I have several friends on the NYPD who keep track of such things and they tell me they are very happy with their Gold Dot issue ammo in both calibers.

NYPD is not alone, law enforcement agencies across the country report excellent results with Speer Gold Dot ammo. Sure, there are failures as anything human designed and engineered will fail, but Gold Dot has the enviable reputation of working far more often than not in actual shootings.

It doesn’t matter if it’s .38 special, 9mm, .40 S & W, .357 SIG or the venerable .45 ACP; all of these calibers are enhanced by the Gold Dot bullet. For those unfamiliar, the Gold Dot hollow point is a unique design that takes Speer hours just to make a single bullet. Of course this process is done in mass so many, many bullets are made at one time. Each bullet begins with an alloyed lead core that is then bonded to a jacket via a patented Uni-Cor process one molecule at a time. This process results in an incredibly uniform jacket in both consistency and thickness. A hollow point cavity in then created via a two-stage process that first creates memory lines in the jacket that bullet expansion can follow. The second stage finishes the cavity to match the bullet caliber, weight and velocity for maximum expansion and penetration. The bullet is then loaded into nickel plated brass cases for reliable feeding. 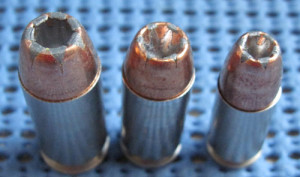 Speer undertook extensive research to ensure each Gold Dot bullet was designed based on individual performance parameters. For example, the cavity of the 124 grain +P 9mm load is not the same as that used in the 147 grain load which is the case with other manufacturers. There is more to creating a properly designed hollow point than just punching a hole in the end of a round nose bullet and Speer has long understood this. I have Gold Dot bullets in my collection that have been removed at autopsy that are double their original diameter but have retained their shape and 98% of their weight. While some bullets perform well in ballistic gelatin and fall woefully short in tissue, the Gold Dot hollow point works well in both the ballistic lab and on the street.

Ironically, when the Gold Dot was first introduced I refused to adopt the load for my former agency as I did not want to be the “guinea pig” for something new. The Speer representative showed up at my range and performed a series of ballistic gelatin tests that were impressive but I refused to adopt it until it was “street proven”. As it turns out I was wrong but I do not regret taking the stand I did at that time. I had been burned before when adopting new (and unproven) equipment and I was not going to do it again. Since that time the Speer Gold Dot has gone on to be, arguably, the most proven load in history in actual shooting situations, rivaled only by the Winchester SXT. I do not get too worked up about the FBI Wound Ballistic Protocols but they are a reasonable “apples to apples” way to test and evaluate combative ammunition and the Gold Dot has always done well in this battery of tests if they are important to your selection.

While attending the 2012 SHOT Show I had the opportunity to sit down and talk with a gentleman who oversees equipment procurement for the Department of Homeland Security and he explained, in great detail, how they go about testing duty ammunition. It was impressive and resulted in the Federal Cartridge Corporation (both Federal and Speer are part of the ATK corporate umbrella) manufacturing a series of loads to DHS standards which are not available for public purchase. These loads are well thought out and he related his agency has been quite pleased with how they have performed in the field.

If you or your agency has the funding and ability to test and develop your own ammunition, that’s great…, do so! However, few of us have this capability and must rely on the testing of others combined with actual street results. With this in mind, I can (with great confidence) recommend the Speer Gold Dot in most every popular caliber based not only on testing but from the feedback I have received accumulating street shooting results for over two decades. Can I say it will work every time? Nope! As I stated earlier, everything human designed and engineered will fail at some point, but Speer Gold Dot ammo is about as “proven” as any product can be. I write this blog as many, many people worry about what ammo they have in their gun and if I can help put these concerns to rest it is worth my time and effort. However, let’s be perfectly frank, it’s more likely any bullet will fail due to the shooter missing than the bullet failing to expand or penetrate. The best +P+, gold plated, deep cavity, serrated jacket, nickel cased thermo-nuclear hollow point is worthless if it impacts the wall next to your attacker’s torso. 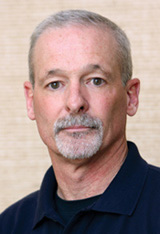 Dave Spaulding is the 2010 Law Officer Trainer of the Year and Law Officer’s Firearms columnist. A 28-year law enforcement veteran who retired at the rank of lieutenant, he is the founder of Handgun Compatives. He has worked in corrections, communications, patrol, evidence collection, investigations, undercover operations, training and SWAT—and has authored more than 1,000 articles for various firearms and law enforcement periodicals. He’s also the author of the best-selling books Defensive Living and Handgun Combatives. Visit his web site at www.handguncombatives.com and like him on Facebook.

2 Responses to The Speer Gold Dot