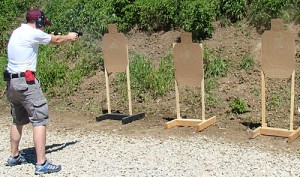 If you ask me, there is no better way to celebrate the 4th of July weekend than with a trip to the range and an IDPA match. Luckily for me, that was in order as it was time to get some rounds downrange through the Ruger SR9c as part of the Quest for Master Class. We ran through two seperate events this weekend as part of the Quest, with the first being the IDPA Classifier. We’ll be revisiting the classifier throughout this series, as well as firing individual stages in the classifier as training drills.

The Classifier
The International Defensive Pistol Association classifier match is a 90 round course of fire broken down in to three 30-round stages. Stage 1, the speed stage is fired from 7 yards and includes strong hand only and weak hand only shooting. Stage 2 contains a mix of speed shoots, strong hand only shooting, and also includes the timeless drill invented by Jeff Cooper, El Presidente. These 30 rounds are fired at a distance of 10 yards. Stage 3 is a test of your skills at long range shooting, with 18 rounds fired at 20 yards from behind cover, and 12 rounds while kneeling behind a barrel at 15 yards. In IDPA, your score is simple – your time plus a half second for each “point down” on any given stage. “Points down” are accrued by firing shots that fail to hit either the center zone or the head box of the IDPA target. A standard IDPA target has three scoring regions, the head and center circle being scored as “0 points down”, the mid chest being “1 point down/ or -1”, and the outer margins of the target being “3 points down/-3”. So if your time on a stage is 6 seconds and you have 2 points down, your total score for the stage would be 7 seconds. The simplicity of IDPA’s scoring system is a great way to help attract new shooters, as they’re able to receive almost instant feedback on their performance.

Going in to the first classifier, I wanted to shoot it with as few points down as possible and focus on accuracy. Stage 1 was a solid performance. The first three strings of fire, which are three consecutive Mozambique drills of two shots to the body and one to the head box all were clean, with no points down. The rest of the stage was the same, no points down and good clean shots giving me a final time of 34.41 seconds for the first 30 shots.

Stage 2 was more of the same. The Ruger SR9c continued to run flawlessly as I fed it magazine after magazine of 115 grain ball ammo. Recoil was extremely light, lighter than I expected for a subcompact gun. Compared to other guns in its size class, the Ruger SR9c has much less felt recoil, due in part to its dual captive recoil spring system. Stage 2 went down with only 3 points down for a total time of 35.38.

Up next was my nemesis, Stage 3. I’ve always struggled with Stage 3 of the classifier – the combination of shooting at 20 yards, shooting from behind cover, and the mandatory tactical reloads have always given me fits. Not this time. Only 12 points down represents my most accurate run on this stage, with a final time of 44.91 seconds. That brings my total time for the first classifier run to 114.70 seconds. That’s good enough to make Expert in Stock Service Pistol, the first division that I’m going for Master Class.

The Gun
A lot of that is because of the shootability of the Ruger SR9c. I’ve often said and heard that a carry gun that you don’t practice shooting is only slightly better than no gun at all. In an age of microscopic 9mm pistols, .357 Magnum revolvers made out of spaceship parts, and wrist snapping magnums, the Ruger SR9c represents something unusual – a realistic carry gun that’s as easy to shoot as it is to conceal. While testing the gun with Winchester Range 147 grain JHPs, I was able to keep 10 shots in the down-zero section of an IDPA target at 15 feet…in 2.87 seconds. That’s right, the gun is so easy to shoot that the shooter can empty an entire magazine in the chest area of a threat target in under three seconds…drawing from the holster! Needless to say, I am seriously impressed with this gun.

The Ruger SR9c continued its flawless performance the following day. One of the things we’re going to be tracking is total number of rounds fired through the gun, as well as match performance. Any matches won at any level from local club matches all the way up to any championship level matches entered will be logged. This measures both my performance as a shooter and the gun’s ability to be run at a high speed in a simulated stressful environment. Both of these are critical elements to “making Master”.

The first match? The Ruger SR9c performed perfectly. The local IDPA club had their annual 4th of July match, which attracts over 60 shooters from the Indianapols Metro area. Using the Ruger SR9c, I was able to be the overall winner of the Stock Service Pistol division, as well as the high overal score in the match. Again, the Ruger SR9c is an extremely easy to shoot gun, the light muzzle flip and excellent accuracy helped me shoot my way to first place.

Keep checking Downrange.TV for more on the Quest for Master Class. Next week, we’ll break down Stage 1 of the classifier and show you how to cut 5-10 seconds off your time.

7 Responses to The Quest for Master Class: First Shots Downrange