The Quest for Master Class – Take it Inside

One of the emails we’ve gotten fairly regularly during the Quest for Master Class is “all these drills are great, but what if I don’t have access to an outdoor range?” Luckily, there are still plenty of great ways to practice indoors and still improve your basic marksmanship skills for IDPA. This week we took a break from shooting the Ruger SR9c to test out a heavily customized Ruger Security Six that I’ll be shooting at Bianchi Cup in 2011. While this gun isn’t legal for IDPA competition, it’s a fine example of a great gun, the Ruger Security Six, being tuned up by a professional gunsmith. For more coverage on the custom Security Six, check out Gun Nuts Media . 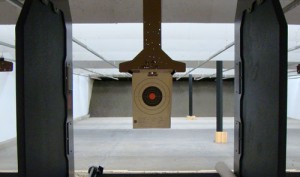 When many people go to an indoor range, this is all they have to work with. An individual stall, and a single paper target. This particular range is one of the nicest indoor ranges I’ve had the chance to use, West Coast Armory in Bellevue, WA. West Coast Armory, unlike many indoor ranges allows shooters to draw from the holster after passing a safety check; their staff is friendly and experienced and the range itself is very well set up for IDPA practice. However, if your facility doesn’t allow you to draw from the holster, one of the most valuable things you can work on to improve your IDPA shooting is your press-out. 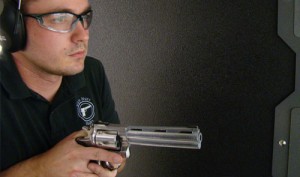 Start with your gun compressed in your ready position, as show in the picture, eyes on the target. From there slowly drive the gun towards the target, which should preferably be an IDPA or IPSC target with open scoring zones. As the gun comes toward the target, begin to pick up your sights before the gun is completely on target. The goal of the drill is to have the shot break at the same moment as you get your perfect sight picture, not too soon and not too late. There is a potential in this drill for you to fire too early – it is perfectly safe as long as your sights are aligned on the target during your press out. That’s why it’s important to dry fire this drill before trying with live ammo. Dry fire this drill repeatedly. 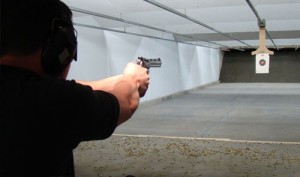 In the image, you can see that the hammer is falling as the shot breaks, which is perfect timing for this drill. Dry fire is very important though to make sure that your timing is good when practicing this drill.

Simple dry fire practice and press-out practice will drastically improve your performance on the range. You’ll find that the ability to drive the gun rapidly to the target from the ready position will translate to picked up speed on the draw.

This weekend, I also had the fortune to use the Ruger SR9c at a local IDPA match to practice some of the things we’ve been working on in the Quest for Master Class. You can see the entire match video here:

As usual, the SR9c performed flawlessly, and I’m looking forward to taking it out to the range to shoot a few classifiers and get classified in Master Class. The more I shoot this gun, the more I enjoy it as a compact 9mm. The SR9c is a little larger than a Glock 26, but smaller than a Glock 19 – which makes it the perfect carry solution for someone of average size. With the dual recoil spring and superior ergonomics, it’s also incredibly easy to shoot. Under match conditions I’m regularly turning in 0.20-.25 second split times, and in practice have actually hit 0.18 with splits. The availability of 17 round magazines that will function 100% without use of the grip sleeve means that if a shooter carries the 10 round magazine as their primary, then in a concealed carry situation you have access to 10+1 with 17 rounds ready for an emergency reload. In a package that is smaller and lighter than a Commander sized 1911, those numbers are hard to argue with.

5 Responses to The Quest for Master Class – Take it Inside