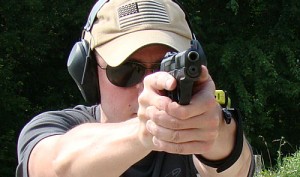 Another good weekend under the belt for the Ruger SR9c in the Quest for Master Class. Sadly, it wasn’t such a good week for our cameras, as the Sunday rains in Indiana prevented us from getting out to the range for our drill of the week and video shoot. The Ruger SR9c did get another 273 rounds of Remington 115 grain FMJ ran through it during the Saturday Steel Match, however. That means for today we’ve got two topics – the first topic comes from the Steel Match, and the second is our practice tip for when the weather doesn’t cooperate.

Obviously, what we’re doing is the Quest for Master Class, specifically IDPA’s 5 Gun Master designation. So why would we branch out from that and shoot Steel Challenge like I did on Saturday, or USPSA like I’ll be doing this Sunday? The answer is simple in the case of Steel (and for USPSA, but that’s next week). Steel teaches you two extremely skill sets that make you a better shooter at whatever you do: faster transitions and aggression. In Steel Challenge, each target gets one hit – that means if you do a stage perfectly, you’ll fire 5 shots per run, one for each target. In Steel Challenge because each target only requires one hit, you spend the majority of your time transitioning from target to target. Swing too far past a target and you’ve cost yourself time, break the shot too early and you’ve done the same thing. This is tremendously beneficial for an IDPA or USPSA shooter, as cutting the transitions on a string of fire can have enormous time benefits. Look at the IDPA classifier, for example. With the exception of the first three strings of fire, every single string on the IDPA classifier involves transitioning from target to target.

The second major benefit to Steel Challenge is the aggressive quality it instills in shooters. Steel is unforgiving. You have to hit each target, there are no overlays or appeals or “judgment calls” in steel. You either hit the target…or you missed and you keep shooting until it’s a hit. That’s where the aggression comes in to play. The great shooters at Steel Challenge understand the balance between attacking the course and playing it safe. It is entirely possible to shoot every stage at a Steel match and hit five for five on every target…but you’ll probably be too slow to win. The more you shoot Steel, the more it teaches you to attack the course and to leave everything on the range. In fact, Steel is perfect to teach this because it has the “throwaway time”. In a Steel Challenge match, each stage fired is 5 strings, and the slowest string is thrown out. A great way to teach yourself to attack a course is to play is reasonable safe on the first four strings, and then go for it with everything you’ve got on the 5th string. When you see how fast you can go, it encourages you to be more aggressive on the first four strings and the next thing you know you’re shooting strings under 5 seconds…then 4 seconds, and then who knows? This directly benefits you as an IDPA shooter. The rules of IDPA in many places encourage timidity in shooters, cover, slicing the pie, and reloads with retention are not “aggressive” techniques, and yet consistently the IDPA champions are shooters that also shoot Steel Challenge and USPSA, sports that reward aggression.

The second part of this what to do when you can’t get to the range. How do you keep your skills sharp when the weather doesn’t cooperate? The answer of course is dry fire. If you’re rained out like we were on Sunday, that gives you an opportunity to perfect your techniques in dry fire. In this week’s video, we look at the IDPA Reload with Retention, and simple drill to practice the reload so that the next time you shoot the classifier, you won’t freeze up on the Third Stage where it’s required.

This was a pretty good week in the Quest for Master Class. The Ruger SR9c picked up a win at the club Steel Match in Production division, and I got prepped for next week’s USPSA State Section Match. Next week we should have video from the State USPSA match, as well as a report on why USPSA will make you a better IDPA shooter.

2 Responses to The Quest for Master Class – Staying Dry