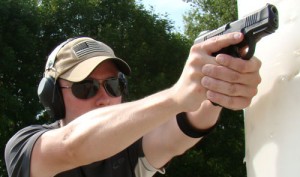 Back at the range with the Ruger SR9c in the Quest for Master Class, and there are few things better than a beautiful afternoon and a case of ammo. Last time we were out, we shot the IDPA Classifier for accuracy, trying to get as few points down as possible and yet still get the best possible time. My final time was a disappointing 114 seconds, but I was only down 15 points on the entire 90 round course of fire. That’s not too shabby, all things considered. This time, the goal for the classifier was to shoot it as fast as possible and not worry about points down. Now, when I say “as fast as possible” I don’t mean just wailing shots into the berm, not aiming, and doing other unsafe and foolish acts. I mean “as fast as I can get my hits on the target with maybe a miss or two”. Not so fast you’re out of control, but as fast as you can push your skills so that you get a little sloppy.

Gun Control
Don’t worry, I haven’t switched sides. When I’m talking about gun control, I’m talking about the most critical aspect of speed shooting – managing the gun’s recoil. If you can’t manage recoil, then you can’t get your sights back on target quick enough to make those second and third shots with fast splits. The first time I shot the IDPA classifier, my scores on the first three strings of fire (which are all Mozambique drills) were around 3.5 seconds each. This time, going for speed, the LONGEST time I had on those strings was 2.58 seconds, and the other two were just a hair over 2 seconds. A huge part of that is controlling the gun’s tendency to want to bounce around in recoil. This is made easier by the fact that the Ruger SR9c is a very soft shooting gun due to its dual captive recoil spring. I keep saying this, but it’s the fastest and softest shooting subcompact I’ve ever shot.

Stage 1
Today we’re just looking at Stage 1 of the classifier. It’s actually one of the easiest stages to shave time off, as it’s composed of 7 strings of fire. The first three strings are all the same – each string is 2 shots to the body and one to the head of the three IDPA targets. Three shots per string. Up next comes 2 head shots on each target for the 4th string (6 shots). Then things get fun, because you have 1 shot to the body of each target…weak hand only. The 6th string of fire is a Half El Pres – start with 3 rounds in the gun, and your back to the targets. On the signal turn, draw, shoot each target once then reload from slide target and shoot each target one more time. Your 7th and final string is 6 more shots, two to each target, but this is using only your strong hand. The nice thing about the 1st stage on the classifier is that it’s very easy to shave time off on all seven of these strings.

Smooth is not fast
I know, writing the above is practically heresy, but “smooth” doesn’t equal “fast”. Smooth equals smooth. Smooth can equal fast if you train right, though! Here’s what I mean. On stage 1 of the classifier, you have to draw the gun 6 times. If your draw is sloppy, it’s going to ad time to your score. A sloppily executed fast draw will be slower than a cleanly executed fast draw – that’s when “smooth is fast”. A great way to pick up time on the first stage of the IDPA classifier is to practice your draws and presentations from the holster in dry fire. Make sure the motion is fluid and clean in dry practice and then gradually speed up. Dry fire is great, because it gives you the opportunity to perfect the mechanics of a movement without worrying about the pressure of the clock or your friends that are watching. Step one for picking up time? Practice your draws in dry fire.

The second way to pick up time on stage 1 of the classifier is to work on your transitions. The last four strings of stage 1 all involve transitioning to new targets, and that slows you down. The best way to practice transitions? Shoot Steel Challenge. I know, this is about IDPA – but Steel Challenge is all about your ability to rapidly change targets, and there isn’t any better practice out there than Steel for practicing picking up new targets and hitting them quick. Plus, Steel Challenge will help you adopt an aggressive attitude towards attacking the classifier, getting you that Master class tag a little bit faster. 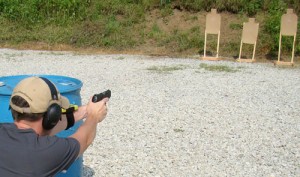 But it’s not good enough. I had to re-shoot a couple of stages, because the Remington 115 grain FMJ ammo I was using caused a couple of failures to feed that created quite the problem for me on Stage 3. IDPA states that when trying for 5-Gun Master, no re-shoots are allowed, so it looks like I’ve got to get back to the range with some better ammo and try that one again! This weekend, I’m going to be taking my own advice – it’s a Steel Challenge Match this weekend, followed up next weekend by the Indiana State USPSA Section match. The Ruger SR9c is going to be getting QUITE the workout in the next couple of weeks, that’s for sure!

Check back next week for a match report, and a drill that will help you shoot more accurately!

6 Responses to The Quest for Master Class – Speed Rules!