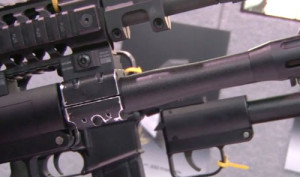 Finally, Michael pulled out his credit card for the first gun purchase, but he also found time to look at some interesting firearms from Mossberg and Tactical Solutions. Ten-X revealed a shotgun which made SWAT team officers to line up at their booth and KA-Bar have a hot selling cane.