Ruger is heading for a new record in firearms production 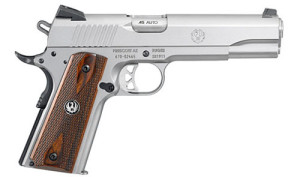 Sturm, Ruger & Company, Inc. (NYSE: RGR) is on pace to beat its own record of 1,114,700 firearms produced in one year, set in 2011. On August 15, 2012 Ruger produced its one millionth firearm of the year, a Ruger® SR1911™ pistol which will be hand-engraved by Baron Technology, Inc. and auctioned off to support the National Rifle Association Institute for Legislative Action.

“Last year, Ruger became the first commercial firearms company to produce one million firearms in one year, and we were incredibly excited and proud to reach that milestone,” said Ruger President and CEO Mike Fifer. “It took us nearly all of 2011 to build one million firearms, but in 2012 we accomplished it on August 15th. We continue to invest in and improve our manufacturing processes to help us respond to the strong demand for Ruger® firearms. We expect 2012 will be another record-breaking year for Ruger, and we want to thank our loyal customers for their continued support.”

The firearms industry has seen consistent growth over the last few years, as measured by the National Instant Criminal Background Check System (“NICS”) background checks as adjusted by the National Shooting Sports Foundation. In July 2012, NICS checks rose by 25.5% compared to July 2011, the 26th consecutive month that NICS checks have risen on a year-over-year basis. Demand for Ruger products has outpaced the growth in overall industry demand, driven by new product introductions including the Ruger American Rifle™, SR22™ pistol, SR1911™ pistol, and 10/22 Takedown™ rifle.

For more information on the extensive, award-winning line of Ruger® firearms, visit Ruger.com or Facebook.com/Ruger.