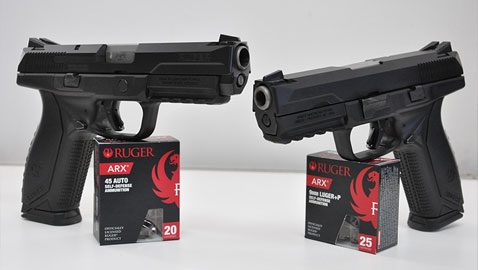 Ruger’s new American Pistols are here. As you read this, Pro Model pistols with no manual safety or magazine disconnect in 9mm and .45ACP should be available at your dealer, as pistols began shipping from the Prescott, Arizona factory in mid-December. Long in development, these American Pistols are the first in a new line from Ruger and you can expect to see them offered in different calibers and configurations as the product line is expanded over the next few years. While not replacing the SR series of Ruger pistols, some of which will continue to be produced, the American lineup will be where new centerfire pistol development is focused.

Sworn to secrecy, I’ve been shooting variations of the American Pistol for several years so it’s a relief to finally tell you about it. My involvement with the project started with taking a survey about desirable pistol characteristics, being asked to pick a favorite from various grip shapes and designs, doing the same later on with plastic renditions of several possible pistols and then shooting various prototypes as they were developed. Before you get the idea I had some importance or influence in this project, the truth is, Ruger consulted with a lot of people inside and outside of the company on the way towards arriving at the final product and while I would like to think my input was valuable I’m certain it was only a small piece in a much larger puzzle. 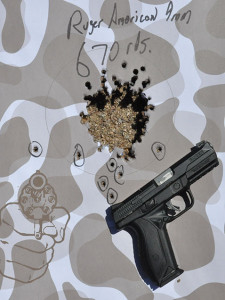 While I encourage you to go to Ruger’s website for specifications on these new pistols there are some points I think you should know about. Of utmost importance to most shooters is the question of reliability. While I’ve only fired a few hundred rounds through the .45ACP version I’ve fired thousands of rounds through several of the 9mm pistols. My experience with the last of these, a pre-production “jury gun” is instructive. In less than 90 minutes I fired 670 rounds of 9mm ammunition from more than a dozen manufacturers without a malfunction. I’m aware of another test at around the same time where two other pistols fired 1,000 rounds each in about the same time frame, again without incident. My experience with the .45ACP version isn’t as extensive but the one I have at hand runs fine with everything I’ve tried in it, with the exception of two failure to feed malfunctions with one brand of +P defensive ammunition. 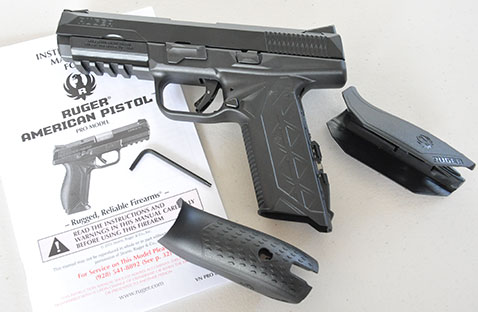 Meeting the “Mil-Spec” standards set forth by the Army for their new pistol project, the Ruger’s stainless steel slide and chassis are black nitride coated for durability and corrosion resistance and all the internal parts are either stainless steel, nitride or nickel Teflon coated. The frame is made from a long glass nylon product, making it extremely rigid and durable without having to add weight and thickness. Recoil is controlled by a recoil-reducing cam that spreads out energy as the barrel unlocks and the barrel and slide sit low on the frame. These factors combine to reduce muzzle flip and felt recoil.

You might wonder why a company would spend many years on one project so I’ll give you an example: At one point Ruger spent a year re-designing the trigger and they are rightfully proud of the result. While writers are accustomed to providing readers with information on triggers measured in pounds – the amount of weight necessary to actuate the trigger, there is far more to the tale. Ruger discovered that factors like trigger finger reach to the trigger, take-up (motion of the trigger before it breaks, and how much effort is involved), smoothness of movement, crispness of the break and how the trigger resets are all measurable factors influencing the shooter’s impression of the trigger. At the factory they measure and record these factors on each pistol by placing it in a custom made testing fixture that provides a graphical representation. Not having such sophisticated testing measures at my disposal I used a set of trigger weights and a Lyman electronic trigger tester and found the 9mm trigger on my sample breaks at slightly over five and a half pounds while the .45 is about the same with the trigger weights but measures almost a pound heavier with the Lyman gauge. Go figure. In both cases the triggers break crisply with minimal take-up and are entirely “usable”, if I can get away with describing them that way. 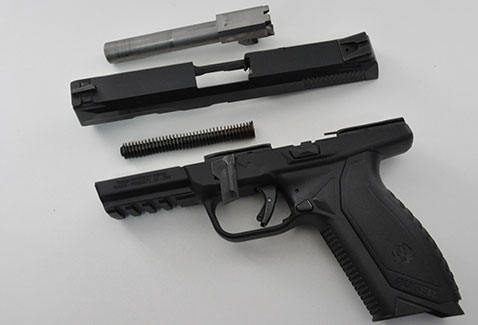 Controls on the pistols include ambidextrous slide stops and magazine releases and a takedown lever on the left side. Field stripping is accomplished by unloading the pistol, locking the slide to the rear, rotating the slide lever down and removing the slide forward off the frame (note that the trigger does not need to be pulled to facilitate disassembly). The captive recoil spring and barrel are then lifted out of the slide. The insert, or fire control chassis need not be removed for normal cleaning and maintenance. By the way, the chassis is the “gun”, the serial numbered part, and the serial number can be found by looking at the rear of the pistol between the frame and the slide.

The sights are genuine Novak three dot white sights in Novak sight cuts. Should you wish to change them, www.shopruger.com has a variety of replacement Novak sights for the American Pistol. Magazine capacity for the .45ACP version is 10 rounds, while the 9mm magazine holds 17. Fully loaded with 11 rounds of Ruger ARX defensive ammunition, the .45 weighs 36.5 ounces, while the 9mm, with 18 rounds of ARX on board weighs 36.0 ounces. While many pistols these days have removable back-straps to accommodate different hand sizes the Rugers use a grip module that changes the grip size as well as reach to the trigger. The 9mm comes with three, a small, medium and large size, and the .45 comes with two, a large and medium module. The modules are secured with a locking device that’s turned with a torx wrench provided with the pistol. Should you wish to install lights, lasers or other accessories, the pistols have a mil-spec Picatinny rail on the dust cover. 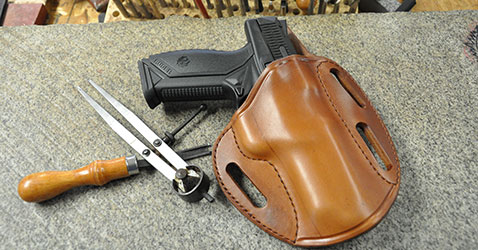 A Simply Rugged Holster for the Ruger American Pistol

Ruger has partnered with a number of holster makers to provide holsters for the American Pistol so you won’t have to wait to find holsters from outstanding manufacturers such as Blade-Tech and Simply Rugged Holsters. Spare magazines and other accessories are available at Shop Ruger. With availability now, and a suggested retail price of $579.00 the first run of 10,000 American Pistols should sell quickly – but don’t despair, I happen to know another 10,000 are coming right behind them and Ruger isn’t planning on slowing down.