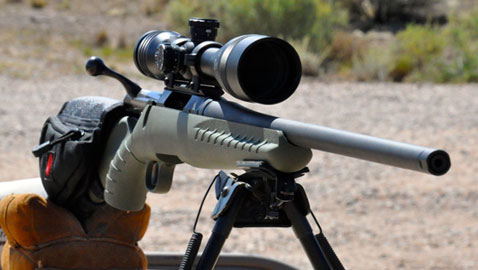 The Age of the Economy Rifle is upon us. What’s an economy rifle? I would say it’s one you could expect to find in the $300 – $500 range that offers features and accuracy on a par with rifles costing twice, to as much as three times more. The Ruger American Rifles are good examples – rifles that are affordable while having features shooters expect and built-in accuracy that used to be possible only after spending a lot of money on a rifle and a good gunsmith to tune it.

After introducing the American Rifle a couple of years ago Ruger has continued to expand the models and calibers in the series. Centerfire rifles were introduced first, and then came rimfire rifles, compact and all-weather stainless steel rifles and now, the Predator series. I’ve tested the Ruger American rifle in .308 Winchester as well as the .22 Long Rifle and .22 Magnum rimfire models and have been very pleased with their features and accuracy. 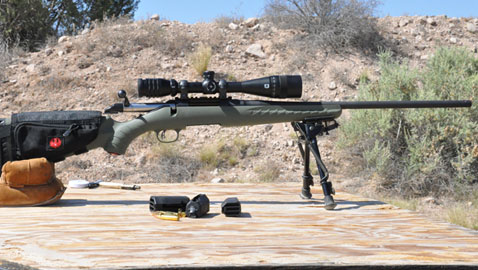 The Predator rifle I received for testing is chambered in .223 Remington. It’s distinctive from the other American Rifles in several ways. Most obviously, the composite stock is green rather than black. The 22-inch free floated barrel has a medium varmint contour – larger in diameter than the standard weight barrels but not as big as a bull barrel. The barrel and action are finished in a matte, non-reflective finish and the rifle has a Weaver rail screwed onto the receiver to facilitate scope mounting. Weighing only 6.62 pounds bare the rifle is a little lighter than a traditional varmint rifle but a good weight for a stalking or predator rifle that’s going to be carried in the field. Proving they’re serious about meeting the needs of a large number of shooters, Ruger is producing the Predator model in .204 Ruger, .22-250 Remington, .243 Winchester and 6.5 Creedmoor, as well as the .223 Remington that’s the subject of this review. Oh, and there’s a compact model with an 18 inch barrel chambered in .308 Winchester that might be an ideal rifle for someone looking for an inexpensive lightweight precision rifle; like maybe a police department.

Features shared by the rifles in the American series include a two-position tang safety that locks the trigger, but not the bolt, allowing the rifle to be loaded and unloaded safely, hammer forged barrels that are easy to clean and very accurate in my experience, the Ruger Marksman trigger that’s user adjustable and breaks crisply at 3.5 pounds in my example, and the lightweight stock with built-in bedding blocks Ruger calls Power Bedding. The centerfire American rifles have a soft recoil pad that I appreciate during long shooting strings and come equipped with sling swivel studs to make attaching a sling or a bipod easy. The round, smooth bolt knobs (the way bolt handles should be, in my entirely biased opinion) feature a short bolt lift that prevent them from interfering with a scope and keep you from banging your fingers against said scope when running the bolt.

The Predator has another feature worthy of special mention. The barrel is threaded at the muzzle allowing the shooter to install muzzle breaks and flash suppressors with ease. The threads also facilitate the use of suppressors. Cans, silencers, or sound suppressors, take your pick, are gaining in popularity and can be used for some form of hunting in about 32 states. I say “about” because the number keeps changing as the trend is moving in the direction of greater acceptance of suppressors. Back in the 1930s gangsters were rampaging about the countryside, the sensationalist press were reporting that the police were outgunned (Bonnie and Clyde may have held a different opinion) and politicians seized upon the opportunity to pass the National Firearms Act bringing short barreled rifles and shotguns, automatic weapons and suppressors under strict government control, licensing and taxation. In the years since I don’t think a criminal has ever used a suppressor to assassinate someone despite what we see every day in movies and on television. Suppressors are finally being seen as legitimate tools for sportsmen and I applaud Ruger for supporting this by making suppressor-ready rifles and pistols.

To get the Predator ready for the range I installed a new Redfield Battlezone 6-18 scope in medium rings on the Weaver rail. I plan to talk more about this scope and another new Redfield designed for .22 rifles in a follow-up article, so I won’t say too much about it here. The scope includes a bullet drop compensator dial calibrated for 55 grain (gr.) full metal jacket (FMJ) bullets at 3100 feet per second (fps) velocity. Digging through my ammo stash I found several brands of 55 gr. .223 ammunition including a treasure I didn’t know I had; some Lake City Match. Heading to the range, I fired 3 shot groups off a bench rest with sand bags but I wasn’t too happy with the results. Groups were running around 2.5 inches and the point of impact was inconsistent, seeming to shift. I took the rifle home, tightened the scope ring screws and confirmed that the stock screws were tight. Back at the range the next day I decided to shoot from a bipod instead of sandbags and recorded these results: 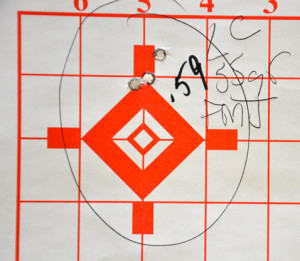 I also fired some Hornady 75gr. Match Hollow-Point (HP) ammo and, although I didn’t chronograph it, the average 3 shot group size came in at 1.38 inches. The smallest group I managed was 0.59” with, not surprisingly, the Lake City ammunition. The overall average for the Day 2 groups with the various brands of ammunition was 1.224 inches. Although I treated the Predator roughly – the conditions were hot, dry and dusty and I didn’t clean the rifle or let the barrel cool – I think it did very well. I had one misfire I can attribute to ammunition that was 25 years old. 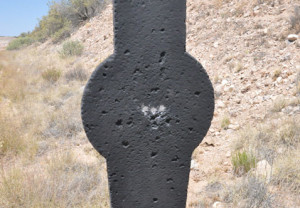 I did some shooting on steel targets out to 300 yards, firing from prone with a Harris bipod. Because steel lacks a distinct aiming point I find it’s tougher to shoot groups. Still, I managed to shoot 1.5 inch groups at 100 yards, 2.5 inch groups at 200 yards and 7 inch groups at 300 yards, all with the Lake City ammunition. When I fired the 300-yard groups the temperature was in the 90s and mirage all but obscured the target, so I’m probably lucky to have hit it. That’s my excuse, and I’ll try to do better when I get the Predator to the range in cooler weather.

Complaints? The 5 round rotary magazines are difficult to load. Marked “Top Feed” the rounds have to be pressed straight down to align the follower and avoid mis-feeding, at least for the first round. I found this clumsy, as the bottom of the magazine is curved to match the contour of the rifle stock. Placing the magazine on a table and trying to hold it still while pushing a round straight down, with some force required, often caused the magazine to skip out of my control. I found it best to hold the magazine in one hand and feed rounds with the other. I have four magazines (the rifle comes with one and spares can be purchased at www.shopruger.com) and plan to leave them loaded to see if they loosen up a bit.

I like this rifle and I’m going to buy it from Ruger. It will shoot “minute of squirrel” at reasonable ranges and should do well on bigger critters – predators – out to 400 yards or more. Go to www.ruger.com for more information on Ruger’s Predator American Rifle.