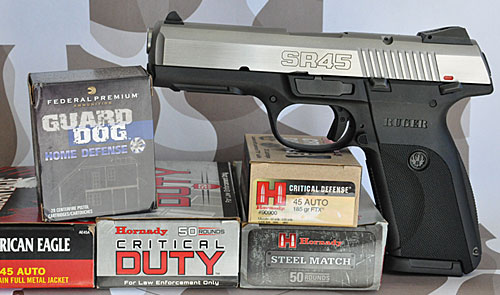 After showing me the SR45 production line at Ruger’s Prescott, Arizona factory, Dave Anderson took me into the engineering department and handed me a SR45 pistol that had completed a 10,000 round test. The pistol was filthy and had obviously been fired until it was very hot, but otherwise looked fine. As the Product Engineer for the SR45, Dave is rightly proud of that pistol. The Ruger SR45 pistol is the latest in a series of SR pistols begun with the SR9, a full size 9mm pistol, followed by the SR9C, a compact version, and the SR40 and SR40C in .40 S&W calibers. Now chambered for .45ACP, the SR45 is a lightweight, easy carrying and easy shooting pistol. Although it’s reasonable to suppose a compact SR45C will come out next, the folks at the factory are tight lipped about future projects. 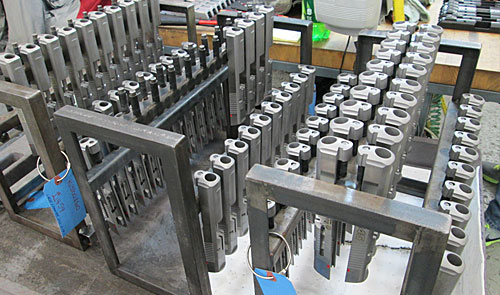 Slides being prepared for final assembly in the Ruger factory

The production lines at the Ruger factory stretch from one end of a very big building to the other. Walking down the line is something like being in a hallway lined with CNC and wire EDM machines tirelessly and precisely turning out parts. Operators service several machines at a time by adding parts, taking finished pieces out and performing inspections to ensure the pistol slides, for example, are being produced to specifications. As a part moves down the line it arrives at an assembly station where small parts, slides, frames and barrels come together then receive another inspection. From there, finished pistols go a short distance to be test fired, and then to final cleaning and packaging in a warehouse area, where shipments are put together and loaded on trucks for distribution. It’s all very efficient, and, although Ruger would prefer I not publish the number of machines on the assembly line or speak about production figures, I will tell you it doesn’t take very long, from start to finish, to make a pistol. Good thing, as demand for Ruger’s products continues to grow. 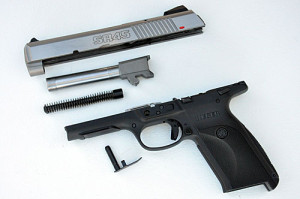 The SR45 is a nice looking pistol that feels just right in the hand. So similar is it to the SR40 that both pistols have the same slide width and will fit in the same holsters, so long as the holster has an open bottom (the SR45 slide is a bit longer than the SR40). While the SR40 uses a double stack magazine, the SR45 is a “stack and a half” so as to keep the frame narrow and to fit most hands better. The glass filled nylon frame is sculpted to place the hand high on the pistol to help control recoil and muzzle flip. There is a rubber, reversible backstrap on the frame, flat on one side and arched on the other, to fit the frame to the hand. The pistol has a correctly rounded trigger guard and a rail for the attachment of lights and lasers. There is a loaded chamber indicator atop the slide and a trigger and firing pin safety. The magazine release and slide stop controls are located on both sides of the pistol, making it suitable for lefties and righties. My sample (KSR45) has a brushed stainless steel slide and the pistol is available with an alloy steel slide with a black nitride finish (BSR45). According to my scale, the pistol weighs 30.0 ounces, unloaded with an empty magazine, and 37.0 ounces fully loaded with Hornady Critical Defense ammunition. In other words, fully loaded with 11 rounds of .45ACP ammunition, the SR45 weighs the same as an unloaded stainless steel 1911 pistol chambered in .45ACP.

Inside frame details of the SR45

The pistol ships with two 10 round steel magazines and a magazine-loading tool. The loading tool isn’t an afterthought, as getting rounds #9 and #10 into the magazine can be a chore without it. This isn’t an issue for casual shooting but I wouldn’t have wanted to load 10,000 rounds into magazines when Mr. Anderson ran his test.

The factory spec for trigger pull weight is tested on a fixture hooked up to a computer in the final assembly area. The minimum trigger pull weight for the SR45 is 4.9 pounds with most triggers measuring a little over 5 pounds. The trigger is crisp and has a distinct reset – frankly, it feels lighter than 5 pounds. Subjectively, the SR45 trigger “snaps”, it doesn’t “sproing”. 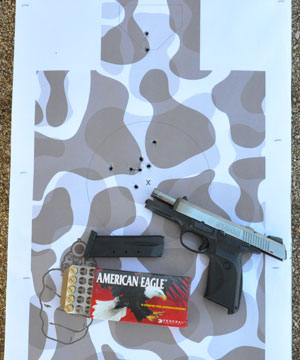 Defensive pistol ammunition has never been better and harder to find. I was fortunate to get my hands on several of the better examples and used them in my test along with .45ACP ball ammunition. Shooting groups from a bench rest over sandbags at 25 yards, all of the loads I tested averaged less than 3 inches, showing the Ruger is capable of excellent accuracy with good ammunition. Interestingly, several of the loads ran at higher velocities over the chronograph than their published velocity figures, indicating to me that the Ruger’s 4.5” barrel has a very smooth bore and allows little gas leakage. The defensive loads I tested included Hornady’s Critical Defense, Hornady’s Critical Duty and Federal Guard Dog. All functioned perfectly in the 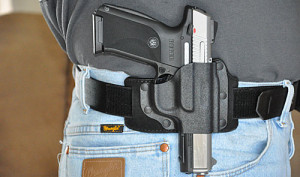 SR45. I also used Federal’s American Eagle 230gr. hardball ammunition and a new load from Hornady designed for range and competitive shooting called Steel Match that uses a steel case and a 185gr. bullet that looks like a hollow point but is designed for flawless feeding in the pistol rather than expansion. I ran combat drills from a Galco Gunleather Tac Slide holster, a hybrid leather/Kydex design providing the straight up draw I prefer. Headshots, fast pairs and multiple targets weren’t a problem for the SR45. The pistol hits where you point it and is a very “soft” shooting 45.

I have a couple of criticisms of the SR45. As mentioned earlier, loading the last two rounds in the magazine is harder then it should be. Although the sights are three dot and the rear sight is adjustable for windage and elevation, the top of the rear sight blade is slightly rounded and not square. During rapid fire you don’t notice it but it drove me a little crazy while doing precision shooting off the bench. Fortunately, Ruger offers genuine Novak replacement sights at www.shopruger.com, available in night sight and fiber optic styles, and these sights have a properly squared rear sight blade.

This is a nice pistol. If I could go back in time to my Border Patrol days I would take the SR45 with me for a duty pistol. It’s that good.

One Response to Review: The Ruger SR45 pistol