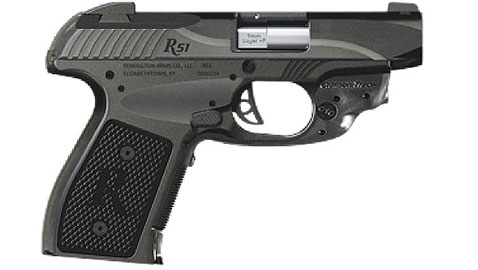 The new 9mm R51 with its Crimson Trace Laser Module.

It’s been said that there are no ideas, but only reinventions of those that have gone before.  While that statement is arguable there is some truth to it.

Born in 1881, John D. Pedersen was to become one of the world’s great firearms designers.  Included among these were rifles and shotguns, such as the Remington Model 31 slide action shotgun and the T1 and T1E3 rifles in .276 Pedersen caliber, which almost won over John C. Garand’s (M1) rifle and the .30-06 cartridge before World War II.   And of course there was the Pedersen Device designed to convert the 1903 Springfield into a high capacity semi-automatic rifle.

However, in addition to Pedersen’s shoulder arms was his Model 51 pistol, which he designed in 1917, and which was produced by Remington Arms in .32 ACP and .380 ACP calibers from 1918 to 1927.  Being an advanced inside hammer, single action design, the Remington Model 51 pistol used a fixed barrel around which the recoil spring rode.  It was of very high quality, making it relatively expensive.  It had a thumb safety, a multi-purpose grip safety and used not a single screw in its assembly.  The pistol, however, was and remains largely misunderstood pertaining to its unique system of operation.  Long having been labeled a “delayed blowback,” the Model 51’s operation was officially labeled as “Hesitation Recoil,” and while this description is closer to the truth, it by no means tells the whole story. 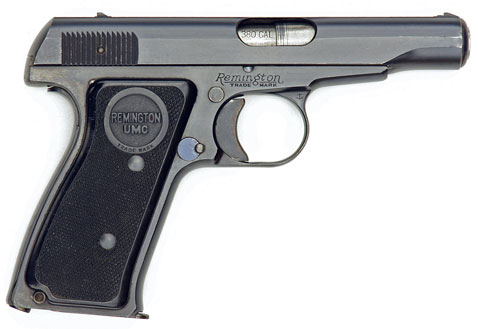 The Model 51’s slide incorporated a separate falling block type breechblock, the two being interdependent in operation.  When the pistol was in battery the locked breech rested slightly forward of the locking shoulder in the frame.  Upon  firing, simple blowback occurred, driving the breechblock (and slide) to the rear for approximately 0.100” a speed of roughly 25 fps where the breechblock stopped against the locking shoulder with the partially extracted casing.  During this millisecond of dwell time, the bullet left the muzzle at about 1,000 fps where the pressure instantly dropped to a safe level.

With the initial kinetic energy imparted to the slide by the breechblock during blowback, the slide continued to the rear for about another 0.125”, camming the breechblock up, free of the locking shoulder and taking it and the spent cartridge case with it to be ejected from the gun.  The hammer was cocked on the way until the front of the slide stopped against a collar on the recoil spring around the barrel.  Under the pressure of the recoil spring, the slide and breechblock moved forward into battery, chambering a new round to complete the cycle.  With this description of the Model 51’s operation and the fact that it began with simple blowback, it might best be described as “Blowback Hesitation Recoil,” or “Blowback Initiated Recoil.”  Imagine, a fixed barrel pistol that was recoil operated.  There had never been anything like it before or since – Until now!
Following its acquisition by the Freedom Group, Remington Arms Company was unleashed to develop “new” firearms, or should we say reintroduce firearms it had made a century or more before?  The first of these was, of course, the Model of 1911 pistol, which Remington had not made since 1918, and it began producing a new 1911-A1 variation of it, the R1, in 2010.  Then, in early 2013, Remington dusted off the drawings for John D. Pedersen’s Remington Model 51.

The man in charge of this project was Adam Walker, a brilliant young designer far removed from the era of John Pedersen, but who has a keen sense and appreciation of what has gone before, especially when it has worked!  The new pistol is called the R51 and is based surprisingly close to Pedersen’s original design, but is arguably much better.   I was privileged to be part of a group to see and shoot a dozen pre-production Remington R51 pistols at a special showing at Gunsite Academy in Paulden, Arizona, in early December 2013.