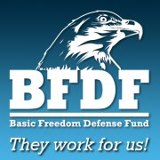 According to Garcia–“Personnel working for BFDF to help collect signatures for Senator Morse’s recall were the subject of known erroneous radio attack ads for the Morse political machine headed by Ed Hall, Chairman of the Denver Democrats and the filing agent for a recently established Morse anti-recall group called “A Whole Lot of People for John Morse.”

Hall is known for referring to Colorado’s second-largest city, Colorado Springs, as a “…right-wing, religious whack-job stronghold.” on his Democratic Party website biography.*

Thousands of concerned and outraged Colorado registered voters in Morse’s district have already signed petitions to get the recall of Morse on the next ballot. BFDF staffers expect to gather far more signatures for Morse’s recall than are necessary.

Unhappy former supporters of Senator Morse have reported to BFDF that they are now on the receiving end of robo calls asking for support of Morse in this early stage of the recall effort.

Additionally Bloomberg’s operation hired a Colorado consulting firm to lobby for anti-2nd Amendment laws in the state. “BFDF expects that Bloomberg money will try to keep Morse in office during the recall effort as a reward for Morse’s anti-2nd Amendment activities.

Morse has made it very clear he is a servant of Bloomberg.”–Anthony Garcia, BFDF spokesperson.

*Note: Should Ed Hall scrub his anti-Colorado Springs remark from his website biography, we have saved the link and it is available from the BFDF.

More information about BFDF as well as links for corporate and individual financial support and volunteering are available at the BFDF website, www.bfdf.org.