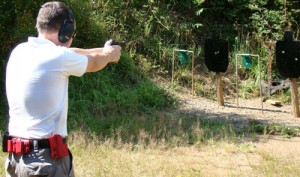 It’s good to be back on the range!  After some downtime, we’ve settled in to our new facilities here in the Pacific Northwest, and we had the opportunity to do some serious shooting with the Ruger SR9c.  The focus of the shooting was to breakdown strengths and weakness on Stage 1 of the IDPA classifier.  I set a goal for the classifier based on past performance – if you can shoot the first two stages in an aggregate time of 25.00 seconds (counting penalties for points down) each, and the final stage in 39.00 seconds aggregate time you’d have a total score of 89 seconds, which is fast enough in any division for Master Class.  Now, you’d have to recalculate those numbers for the revolver division, but not significantly.

On the first stage of the IDPA classifier, one of the critical elements is the draw.  There are six presentations on stage 1, which means that a quarter second of savings in time per draw turns in to 1.5 seconds.  Similarly, there are 8 target transitions on stage 1 – again a huge place to pick up time by improving your speed at transitioning the gun from target to target.  This week’s video takes a look through the entire classifier.

In the video, we finished the run with an aggregate time of 28 seconds and change with points down added in.  While not a terrible time by any measure, it was a definite whiff on the goal of 25 seconds, and that’s due entirely to my sloppy performance on two key areas.  On String 6, the half-El Presidente drill, I had trouble on my first shot and lots of trouble on my reload.  Bobbles there are going to ad a ton of time to your score, and I’ve shot that drill clean before in under 5 seconds.  My time in this run was over 6, which is not fast enough to get the job done.  Another huge problem area was String 4.  This string requires two head shots to each target, and for whatever reason I simply could not get the front sight in position.  I ended up shooting it much slower than usual, a total time of 4.88 seconds.

There were bright points however on the classifier.  My weak hand only shooting has improved dramatically through dry fire practice, which is allowing me to really ramp up the speed on String 5, the weak hand only string.

For those that are curious, here are the par times that I use when shooting the first string.  These are adjusted, so your aggregate time after points down should be at or under these times to hit the 25 second goal:

Aiming for those par times will get you under that 25 second mark.  Beating those part times will give you room to spare on Stages 2 and 3, where the difficulty is increased.