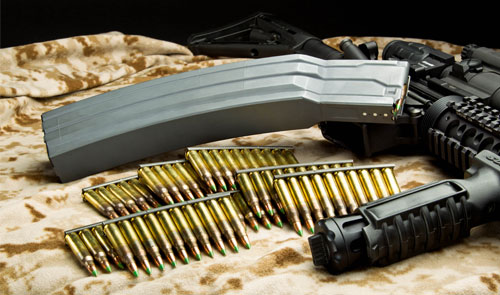 Fountain Valley, CA — SureFire, LLC, manufacturer of high-end illumination tools and tactical products, is proud to announce the release of its hi-capacity 60- and 100-round (STANAG 4179) aluminum magazines for .223/5.56mm NATO M4/M16/AR15-style firearms. These new high-cap magazines (HCMs)—dubbed the MAG5-60 and MAG5-100—are designed to provide military units with an overwhelming tactical advantage in the delivery of firepower.

“In the current wars in Iraq and Afghanistan, ambushes are commonplace, and the outcome is often determined in the first 30 seconds,” said Don Alexander, SureFire’s Director of Military Sales and retired Special Forces operator with six combat tours. “Firepower and the ability to stay in the fight are key. These magazines will reduce soldier vulnerability by keeping them in the fight for longer periods of time, with less downtime spent on reloads.”

In battle, it typically takes the average soldier four seconds to reload his weapon and reacquire a target, valuable time that could be spent engaging threat targets. At best, 30-round magazines allow a soldier to fire no more than 150 rounds in 30 seconds. SureFire’s 60-round high-cap magazine increases that figure to 240 rounds; its 100-rounder to 293 rounds. And both will support military units planning to incorporate full-auto firepower to more of their operators.

SureFire HCMs easily and securely fit into the host weapon, with the bolt closed, when loaded with the maximum round count. The design of the magazine takes into account the allowable tolerances of cartridges manufactured to NATO and SAAMI specifications. A 4×2 quad-stack configuration features a revolutionary internal spring and follower system designed to be more reliable than current standard MILSPEC USGI 30-round magazines. This proprietary internal design also allows SureFire HCMs to be stored indefinitely while fully loaded, in preparation for deployment, which means individual units can be issued ammo supply crates with pre-loaded magazines instead of empty mags and ammo cans, another potential lifesaving benefit in critical-response situations.

The MAG5-60 will fit into most nylon pouches with Velcro® cover flaps intended to hold two standard 30-round magazines, but double magazine pouches with stitched partitions may require some alteration. Both the 60- and 100-round HCMs can be disassembled for periodic cleaning or as required. The magazine floor plate can be easily removed from the body using a punch, the tip of a cartridge, or a variety of common tools.

SureFire HCMs are the result of an entirely new division at SureFire, in partnership with L. James Sullivan and Bob Waterfield of Arm West, LLC. Mr. Sullivan is best known for co-developing the Armalite AR-15/M16 (M16A1) rifle and the original 20-round 5.56mm box magazine. They will be assembled and distributed by SureFire’s new Reno, Nevada, facility, the company’s first venture outside of Southern California, and will initially be available only from authorized SureFire dealers in states without any HCM regulations. Processes are also being developed for dealers in locations that do have HCM regulations, including California, Hawaii, Illinois, Maryland, Massachusetts, New York, Ohio, and Washington, D.C. MSRP is $129 for the 60-round magazine and $179 for the 100-rounder, with orders expected to begin shipping in March of 2011. 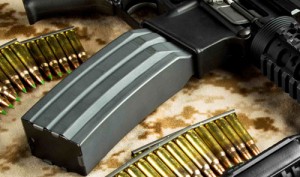 About SureFire
Located in Fountain Valley, California, SureFire is a leading manufacturer of high-performance flashlights, weapon-mounted lights, and other tactical equipment for those who go in harm’s way, or anyone who demands the ultimate in quality, innovation, and performance. SureFire illumination tools are used by more SWAT teams and elite special operations groups than any other brand. SureFire is an ISO 9001-2008 certified company. For more information, visit www.surefire.com