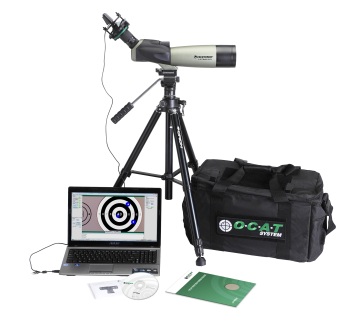 This release represents the first information concerning a truly revolutionary firearm training system that will work inside a residence (laser mode) or at the rifle/pistol range with live ammunition. Under development for over 3 years OCAT System (Optical Computer-Aided Training System) is the real deal for training and refining shooting skills at any level of expertise. This system will be a boon for individuals, law enforcement, and marksmanship trainers everywhere.

The Basics of operation–with live ammunition: Use either your compatible spotting scope or the OCAT System (Celestron Ultima 80) variable power spotting scope to aim at the target. Attach the OCAT System camera unit to the spotting scope. Plug it into your laptop with their exclusive software installed on it–they also sell a laptop if you do not have one. Follow a few quick start up steps and fire your shots.

The scoped camera (back with you–not out in the dirt with the target) will show the target hits on the computer screen. And the program will immediately analyze the shot and provide instant verbal and visual feedback including location, order of shot and timing of each shot. The OCAT system may also be set to give additional feedback and target analysis of shots fired. When you leave the range you can save all target information, images and analysis for later use at the click of a button.

Basics with LASER training device: You load the LASER unit into your firearm’s chamber and lock it firmly and accurately into place for repeated precise shooting. Then you can fire at the OCAT System unit in the comfort of your own home using the same equipment and software as above. Using the firing pin activated LASER with the OCAT System will show and track hits on the computer view of the target just as if you fired live ammunition.

Now the “ah ha moment.” With OCAT System LASER training you will also see line tracings on the target’s computer screen. These tracings will show you the direction of movement of the firearm the instant you fired the shot. This is feedback impossible to get with live ammo. Or even a personal trainer due to the recoil. However the LASER has no recoil so if you are doing anything incorrectly as you fire the shot the OCAT System will show it to you.

This level of precise (and minute) shot movement feedback is as good as it gets and is only possible with this precise LASER system and computer tracking program. Because the OCAT System operates at the speed of light not at 950 to 3,000 FPS it is possible to make very exacting analysis of shots fired. The impact and movement proof is right on the screen and confirmed with computer verbal analysis of the just fired shot.

The bad news is because the LASER does not lie you can’t alibi out of bad shots by blaming ammunition, firearm, rotation of the earth or meteor showers on Mars, etc..