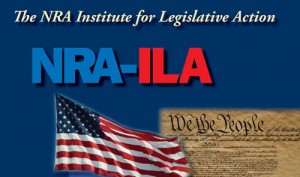 From NRA-ILA: Two attacks on the Second Amendment rights of California’s law-abiding gun owners are currently awaiting consideration in Sacramento.

AB1810 would establish a registration system, similar to the one currently in place for handguns, for all newly-acquired long guns. Under AB1810, the make, model and serial number of the firearm as well as the identifying information of the purchaser would be recorded and kept on file by the California Attorney General’s office.

If AB1810 were enacted, violent criminals would continue doing what they do now – obtain firearms through illegal means. This bill would not decrease crime but will rather have disastrous effects on the already financially unstable Golden State. AB1810 would impose additional burdens on California’s taxpayers to maintain the registration system as well as on the state’s licensed firearms dealers, small businesses who already deal with extensive business requirements.

One simply needs to look at Canada, a nation with draconian firearms registration, to see the results – billions in cumulative administrative costs, annual cost overruns, no clear substantiation of public safety benefits, unjust prosecution, and a bureaucratic complexity that daunts those willing to comply. Ironically, California is considering a new registration scheme as Canada is considering doing away with its system.

Simply put, AB1934 would outlaw the open carrying of a handgun for self-defense. This bill is a blatant attack on the self-defense rights of law-abiding Californians.

AB1934 is a knee-jerk reaction by anti-gun legislators to punish citizens for engaging in the legal act of openly carrying an unloaded handgun. In reality, the open carrying of firearms by law-abiding citizens is forced by California’s unfair concealed carry law, which allows some citizens from some counties to receive a permit to carry, while their neighbors in the next county are denied that basic right for political, not public safety, reasons.

Please contact the members of the Senate Appropriations Committee TODAY and respectfully urge them to oppose AB1810 and AB1934. Contact information for the committee can be found below.