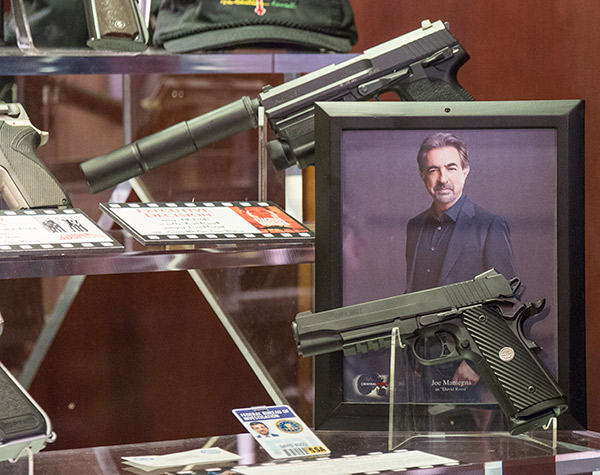 Recently, at the grand re-opening of the National Firearms Museum’s Hollywood Gun Exhibit, Criminal Minds star Joe Mantegna officially placed a SIG SAUER 1911 pistol, identical to the pistol used by his character, David Rossi, in the upcoming 14th season of Criminal Minds, into the exhibit. The customized pistol is a SIG SAUER 1911 TACOPS Full-Size inscribed with the eagle, globe, and anchor of the US Marine Corps to represent the prior service of Mantegna’s character, FBI Special Agent David Rossi, in the USMC.

“It’s an honor to have the SIG SAUER 1911 TACOPS be chosen by Mr. Mantegna as the pistol of choice for his Criminal Minds character, FBI Special Agent David Rossi,” said Tom Taylor, Chief Marketing Officer and Executive Vice President, Commercial Sales, SIG SAUER, Inc. “Then to have it literally be placed into history at the NRA Museum by Mr. Mantegna is very special, and humbling, for all of us here at SIG SAUER.”

Joe Mantegna, who also hosts the Outdoors Channel’s popular series Gun Stories, cut the ribbon at the grand re-opening of the National Firearms Museum’s Hollywood Gun Exhibit at the NRA Museum in Fairfax, VA on May 25, 2018. NRA President Lt. Col. Oliver North, USMC RET accepted the donation on behalf of the NRA from SIG SAUER and presented by Mr. Mantegna.