Since The Best Defense: Survival started airing, we’ve had more than a couple of people ask why we’ve been featuring the AR family of rifles so much when there are other popular semi-automatic rifles that are also appropriate for defensive use. The most important answer is that the techniques and tips were sharing are not platform specific, so it really doesn’t matter. I hope that viewers concentrate on the concepts and not  what gun we happen to be using to demonstrate.  That said, the fact is that it wasn’t a conscious choice by any means, at least not specifically in terms of what to use on the show. Of course, my preference for the AR platform  has been around for a long time. I purchased my first one, a Colt, while still in college. Myt first formal training with them was in the military, then in law enforcement and many private sector courses followed. As an instructor, the overwhleming majority of my students with semi-automatic rifles have also used AR type rifles. So, when it came time to load up the truck with gear for the  TBD:S taping sessions, a couple ARs naturally made their way into the mix.

Now, this is not to say that I have no experience with other systems. My first center fire semi-automatic rifle was actually an M1 Carbine that I purchased in the 80’s and shot quite a lot and I’ve owned a couple of Ruger Mini-14’s. I’ve got a healthy amount of experience with the HK semi’s,  (MP5, HK93, etc), including some recent time with the new MP7. I’ve had enough trigger time with Sig rifles and FALs to be confident with them as well. One system that I have not had much experience with, however, is the AK family of rifles. Like just about everyone else in the early 90’s I bought a couple of SKS’s and even a Mak-90. The Mak became part of a misguided bullpup experiment and has probably had less than 100 rounds through it. So, I’m definitely lacking in experience with what is undoubtedly the most common combat rifle on the planet.

The AK has had a real surge of popularity recently in the United States. Many instructors are offering AK specific courses and everyone is reporting more and more of them showing up in tactical rifle courses. The AK has always been regarded as a worthy weapon system. Generally, the opinion that I’ve heard most often , from those who know and those who simply repeat what they hear, is “Reliable, inexpensive, but not very accurate”.  So, combine the recent feedback about expanding coverage for alternatives to the AR and the surge in popularity, add the fact that it is the 25th Anniversary of Red Dawn, and it became obvious that I needed to get an AK and get myself into a course.

Acting on that thought process started about 1 month ago. While running a Combat Focus Shooting Course at Coal Creek Armory, I purchased a Romanian AK. The rifle seemed fine and was well recommended for the price ($550). One thing that people constantly say about the AK is that it is less expensive than the AR. In the interest of really testing the theory, I decided to try to keep my project AK as cheap as possible. I did need to upgrade it a bit though, in order to seriously compare it to a defense ready AR.

On the way to the training course, I stopped in Nashville and met up with Curtis Dodson. Dodson’s is one of the areas top supplier’s of firearms and accessories. He outfitted me with a Tapco AR type Stock, which would give me more of the feel that I was used to in a carbine and a UMG foreand rail system on which to mount a red dot sight. While a red dot sight may not be necessary, it is certainly a preference of mine. The trick, of course, was to keep the rifle as inexpensive as possible. A Redhead Ascent red dot optic was just a touch under $50 at Bass Pro Shops. The last piece of the puzzle was, admittedly, a little high end. I’ve been playing with the Magpul MS2 Sling since January, but I haven’t been through a course with one. This sling is quickly adjustable and just as quickly converts from a single point to a two point sling. In order to get more time actually using what I think is the first real innovation in slings in over a decade, I decided to use it in the course. All in, the cost of the rifle and accessories was still under $800 retail. 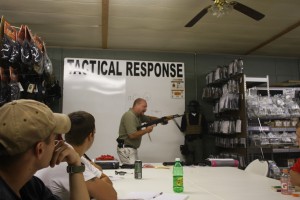 Yeager demonstrating a very reliable and efficient way of using a fresh mag to actuate the magazine release and clear the empty during an AK reload.

As I noted earlier, several instructors and organizations are offering AK courses or have well thought out AK techniques that they incoroprate into their tactical rifle programs. Scheduling is always a big challenge with any course, but this week happened to be open and James Yeager happened to be offering a Fighting Rifle course through his company, Tactical Response in Camden, TN. I needed to get to TN anyway, so all the ducks lined up nicely in a row for me to be able to actually get some AK experience,under quality supervision, much faster than I thought it would!

The course itself was great. Yeager started the day off at his well stocked shop with a lecture session covering the goals of the course, safety rules and the fundamentals of operating both the AR and the AK (the only two systems being used by students). After about an hour, the students convoyed out to the range with the two primary instructors, Jay Gibson and Brian Brekau. Jay and Brian are experienced instructors and “operators”, Brian in the private security industry and Jay with the USMC.  The range session  started with some pistol work. I was, honestly, a bit surprised that an hour was spent on pistol techniques at the beginning of a Fighting Rifle course, but I understand why they did it. In order for students to properly transition to their pistols in the event of a problem with their rifle, they need to be able to do so safely and should be doing it properly. Jay and Brian went quickly through the fundamentals of presentation from the holster, defensive pistol shooting and reloading.

After the pistol familiarization, we put our rifles and other necessary gear and on and got into the core of the course. The day moved fast, as the instructors covered a lot of ground including the execution of the fundamentals that Yeager had covered earlier as well as other imnportant aspects of fighting with a rifle. Shooting was done at different size targets and different practical ranges, from a variety of positions and, eventually, while moving in all of the cardinal directions. The day ended with moving and shooting drills in a square and then while weaving between barrrels moving to and from the target. 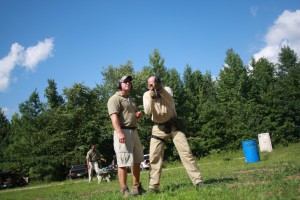 For me, getting to be on the student side of the range is always great. Working with a new weapon system is something that I haven’t done in a long time and the AK is certainly different enough from anything I’ve shot extensively to have required some serious learning. I definitely picked up a few more efficient ways to do some things, like reloading the rifle, that I thought I had figured out pretty well on my own. All training should help you improve what you are doing. Good training should force you to challenge your prior  experience and thoughts. GREAT training gives you the opportunity to improve the way you do things and how well you do them.

The Romanian AK itself held up really well, despite the low budget approach. Reliability was as advertised and the rifle was as accurate enough to do everything I needed of it in this course. The only two stoppages I had during the day were both atrributed to a cheap 40 rnd magazine, which I should be tossing in the trash a little later this evening. The red dot did not make it through the day, however. The mounting solution wasn’t up to the dynamic course and the unit was removed about two thirds of the way through the day.

I’m sure that I’ll be doing more with the AK family of rifles and integrating some of the techniques taught by Tactical Response into my program. You can also expect to see the rifles in future training DVDs and TV episodes, as they are only likely to increase in popularity in the near future.