Terry and Larry start off the new season testing one of the most requested films, Quigley Down Under. Terry will see if he can hit a 564-yard shot with a Sharps rifle and then we will attempt the “Quigley”. An 800-yard shot, trying to kill 2 bad guys with 1 bullet!

All episodes from season 1 is available on MOTV:

Episode 101 – Terry’s Criminal Minds
A murderer tries to kill his final victim as the car they are in slowly sinks to the bottom of a lake. The only way to save the victim is to rescue her as the car continues to sink. We test fire multiple handguns underwater to see if you can actually penetrate a car windshield and save the victim.

Episode 102 – Shark Go Boom
In this iconic scene, Chief Brody hangs on to his sinking boat as a giant shark approaches him with a scuba tank lodged in its mouth. We construct a giant shark on a motorized platform to test if you can hit, and explode, the tank with an M1 Garand rifle while perched in a precarious position.

Episode 103 – The Good, The Bad and Terry
In this classic western, Clint Eastwood – aka “Blondie” – saves Eli Wallach from the hangman’s noose three separate times by shooting and severing the rope that he hangs from. We recreate each scene and test the reality of these shots with the weapons that were used.

Episode 104 – Dying Hard
John McLain (Bruce Willis) finds himself dangling from the side of a building. The only way to save himself is to shoot through the glass window and break through to safety. Using the same Beretta 92 handgun, we reconstruct the office glass and see if our host can break through.

Episode 105 – Schapbo
John Rambo’s ability to decimate enemies all by himself has created some of the most incredible weapon stunts in Hollywood history. We test the reality surrounding these iconic scenes from this blockbuster franchise.

Episode 106 – Terry and The Minigun
Can you really fire a GE Minigun handheld with ammunition held in a backpack (also seen on Captain America: Winter Soldier). Additionally, for one of our larger tests – can you actually chop down a jungle forest with a minigun? Actor Bill Duke – who co-starred with Arnold Schwarzenegger for the film and who’s character performed this weapon stunt – joins us to find out. But first, we have to build a jungle.

Episode 107 – Scoreless
Using a unique method to crack a safe, Nick Wells (Robert De Niro) uses a blowtorch to cut through a safe, fill it with water, and blow the door off using a small explosive device. We test this, along with the effects of a 20mm antitank rifle on a safe from the movie Thuderbolt and Lightfoot.

Episode 108 – Terry vs. Gorn
Captain James T Kirk’s battle with the Gorn alien is one of the most popular episodes from the original series. He defeats the Gorn by creating gunpowder from the base elements found on the planet. We partner with Star Trek: Original Series set tour in New York, as we test the reality of making gunpowder by hand without actually blowing yourself up. 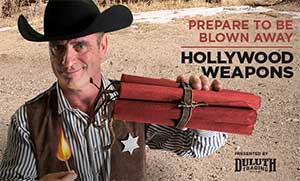 Prepare To Be Blown Away! What is scientific fact — and what is Hollywood fantasy? Some of the most thrilling weapons action sequences from movies and TV are put to the test on Hollywood Weapons, the all-new Outdoor Channel original series. Join U.S. Special Forces veteran Terry Schappert and weapons master Larry Zanoff as they utilize the expertise of Hollywood’s premier prop house and weapons builder — and break down some of the most explosive action in Hollywood history.

All episodes from season 1 is available on MOTV.