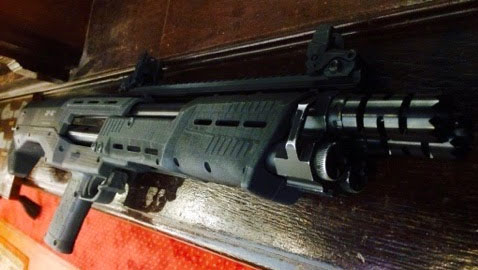 The DP-12 goes down a completely different, and decidedly unconventional, path. It has 2 7-round tube, but it also has 2 barrels!

I’ve pretty much stepped back on the first of the new generation of bullpup pump guns, notably the Kel-TEC KSG and the Turkish UTS-15  for a whole bunch of reasons, including ergonomics, unproven systems and, frankly, reports from people I trust that the guns still have hit-or-miss problems (that’s a gunwriter euphemism for, “They don’t work”). Oleg Volk at ALL OUTDOORS did a comparison of the 2 systems a while back.

I saw a prototype of a 3rd next gen pump at the NRA Show, but, honestly, didn’t pay that much attention to it. I did think it odd that the shotgun, the DP-12, was coming from Connecticut Shotgun Manufacturing Co., CSMC, (doing business as Standard Manufacturing LLC), the foremost manufacturer of premium double barreled shotguns in America. CSMC got their start making Winchester Custom Shop Model 21s, the iconic American side-by-side double. From that they’ve expanded into multiple lines of high-end doubles, including their top-of-the-line A. H. Fox guns that rival their much older Italian and English competitors. Using modern manufacturing techniques combined with old fashion hand-work craftsmanship, CSMC has brought high-end classic shotguns into reach for a much wider audience.

CSMC seemed to me to be an unlikely company to step into the “black bullpup shotgun” market. We were already headed to CSMC for the shotguns and to feature another eclectic product, the 3/4 scale .22 LR “Tommy Gun” I’d also seen at the NRA show… a friend of mine asked me to take a close look at the DP-12 while I was there.

The 2 other entries in the field, the KSG and the UTS-15 both take a similar path — a single barrel fed by 2 separate 7-round tubes, the Kel-tec tubes on the bottom of the barrel; the UTS-15 tubes on top. The UTS-15 has user-selectable tubes, while the KSG has to be manually shifted to the second tube when the first is empty. A lot of my concerns focused on those systems that shifted from tube to tube. I really liked the SRM semiauto system with it’s manually operated rotary tubes (didn’t like the high MSRP’S, however).

The DP-12 goes down a completely different, and decidedly unconventional, path. It has 2 7-round tube, but it also has 2 barrels! That’s right…a double barrel pump gun. Two rounds are chambered with each pump; the trigger is then pulled 2 times, the first to fire the right barrel, the second to fire the left barrel. Pump, and you’ve got 2 more rounds.

Essentially, CSMC mode the decision to combine 2 time-proven systems — the pump shotgun, which we’ve had pretty much down since the 1890s, and the single trigger double barrel shotgun, which is easily as old. CSMC is building some of the best double barrel shotguns in the world… they understand shotguns triggers on a DNA level. The 2 separate pumps are dead conventional… think 2 Remington 870s bolted together. 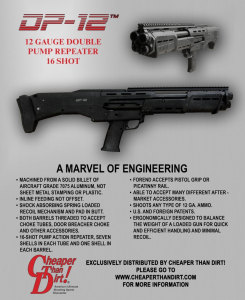 CSMC approached the design with the same manufacturing philosophy they use for all their shotguns — start with a big honking piece of metal and work from there. They already manufacture their own barrels, drilled, not hammer-forged, on steel bars, using custom drill bits designed to minimize chatter and deliver a smoother bore. The receiver for the DP-12 is machined from a solid block of aluminum. Overall, the gun is built like a tank.

When  I first handled the double barrel pump, the pump system felt like an 870, a “real” gun rather than a tactical Super Soaker. It looks clunky, but the bullpup doesn’t feel clunky when shouldered. In fact, it feels like nothing so much as an FNH FS-2000 bullpup carbine, which I have a lot of rounds through. It’s got rails in the appropriate places, an AR standard safety, threaded barrels for chokes or breachers, loads like those 2 870s bolted together.

The trigger is fine… probably shouldn’t be surprised at that considering CSMC’s core competence. My question was how was I going to adapt to pull-pull-pump. Keep in mind that I shoot a double barrel in cowboy competition and have literally thousands of rounds through my Browning BSS in the course of a year. I also compete in 3-Gun Heavy Metal, which requires a 12 gauge pump… I shoot a Benelli Nova (which handles a lot “clunkier” than the DP-12, BTW).

I got a chance to run 2 16-round loads through the gun, 1 high brass field loads; 1 heavier self-defense loads. Here are my initial impressions:

Conclusions? I really think the DP-12 has a lot potential, enough that I’ve asked for a T&E gun to give it a full workout and film it for DOWN RANGE. I might not want to carry this gun to Afghanistan, but it would be one heck of a bedroom gun with tube #1 loaded with Hornady Tap buckshot and tube #2 loaded with Federal law enforcement slugs. I’m thinking in that situation, I win. It also has huge potential as a car gun and for other close quarters situation. The DP-12 is based on proven technology, and there’s no strange Rube Goldberg engineering to sneak up and bite the user on the butt.

The questions I have is on topping up the mag, reloading and, in general, the entire manual of arms, but I think that solvable with a few hands-on days to work out the techniques. Bullpups flatly require a different manual of arms from other guns we’re familiar with… I’m going through that with the Tavor… it’s not bad, it’s just different.

I know how the DP-12 is made because I walked through the entire process, and the quality is really impressive. That’s important to me (and it should be important to you!).

My understand is (as seen in the flyer above) is that the DP-12 will be exclusively distributed by Cheaper Than Dirt, and the MSRP will be in the $1k region… although that is not fixed at this point. I don’t have an ETA on the sale of the DP-12, but I do know for a fact that it is currently in full production.