About the Author: Andrew Tuohy served in the US Navy as a Hospital Corpsman HM2(FMF). After completing Field Medical Service School (FMSS) he was assigned to the 5th Marine Regiment. Today Andrew is the Firearm Technical Consultant at LuckyGunner.com, where he tests their ammunition and ensures it functions correctly in a wide range of firearms. 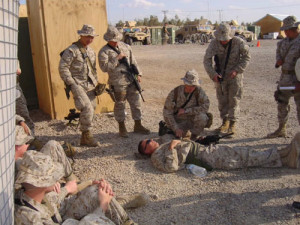 The author instructing Marines on the treatment of abdominal injuries while deployed to Anbar province, Iraq, 2006.

As an FMF Corpsman, and previously having worked in an emergency room, I have received training and gained experience related to the treatment of trauma victims in the pre-hospital setting. I have treated, and assisted in the treatment of, gunshot wounds from handgun, carbine, rifle, shotgun, and medium machine gun platforms, as well as penetrating and non-penetrating injuries and burns from blasts such as improvised explosive devices and artillery shell/mortar round explosions.

When it was suggested that I write an article about the medical gear I bring with me when I go shooting, I thought about how narrow that topic was. Yes, having the right gear is important, but it would be somewhat of a disservice to simply give a list of what’s in one of my medbags without covering other topics that could be essential during emergencies at the range or in the field.

Whether you’re setting up a medical kit for the first time or you’ve already bought one, there are a few things that are probably not at the front of your mind. I’ll start from the top in terms of life-saving importance.

Having a Plan
Emergencies, by definition, occur when they are not expected. Getting over the shock that something bad has happened can take time – often too much time. The sooner you call for help, the better off the injured person will be. But before the paramedics arrive, you need to take effective action. In order to do that, you should have a plan in place for how to respond to an emergency. It doesn’t have to be complicated.

Preparing can be as simple as letting everyone know where the medical supplies are located and determining who has the best cell phone signal, if you’re traveling in a group. Have an idea of at least two people who can provide immediate first aid – if you only designate one, Murphy’s Law states that they are probably going to be the person who gets injured. When traveling as a pair, both of you should be ready to provide aid and call for help.

If you shoot or hunt alone, make sure your location is known and establish a time for your return. This is an oft-repeated piece of advice, but the number of times it is ignored is surprising.

Communications
The very best thing you can do in the case of severe trauma is to get the victim to a higher level of care immediately. There is only so much you can do with the amount of gear you can fit in the trunk of a car or bed of a truck. None of that involves trauma surgeons and an operating room, along with three or four more doctors and a dozen nurses and technicians, all of whom are probably more “current” in terms of treating trauma victims than you or I.
With that in mind, keeping communications with the outside world can literally mean the difference between life and death. For shooting ranges close to populated areas, this is less important, because there are probably land line phones nearby, which you can use to call 911. Even so, it’s a good idea to have a cell phone – and to make sure that you have service at the range.

Communcations are vital during an emergency situation

When shooting or hunting in secluded areas, cell service can be spotty or nonexistent. I do venture to such locations quite frequently, and I am hardly ever without a satellite phone, a satellite tracking device, and/or a VHF radio (which can be used to contact aircraft). While these devices sound expensive, they have come down in price in recent years. Satellite phones can be had for the cost of a mid-range rifle scope, handheld VHF radios for even less, and the satellite tracking devices are around $100. Another option is a ham radio, although they require training and licensing.

If you shoot or hunt in remote locations that might require an air ambulance response, consider having signaling devices, too. Mirrors are exceptionally effective (if used properly) during daytime, and a glowstick attached to a short length of paracord, and swung rapidly in a circle, will help aircraft find you in the dark. However, there are many other ways to signal aircraft and I highly recommend researching this topic further.

Training and Education
While not everyone needs to be a paramedic, having a basic understanding of human anatomy & physiology and emergency first aid techniques will help in a wide variety of situations, and having a trained person on scene with no medbag is better than having a medbag and no training or knowledge. It’s good to take classes from organizations such as the Red Cross, but in the meantime, picking up a few good books on the subject can’t hurt, either.
In addition, knowledge of CPR is good to have – and CPR has become a lot simpler in the last few years. “Rescue breathing”, also known as “mouth-to-mouth, has been removed from the equation, primarily because recycled air is not very helpful, and the pauses in chest compressions to allow “rescue breathing” are, in fact, detrimental. Therefore “continuous chest compressions CPR” has been shown to result in higher survivability rates. Plus, it can be learned quickly, and you don’t need to take a class to learn it, really – you’ll get a very good idea of how to do it from a simple and entertaining YouTube video: