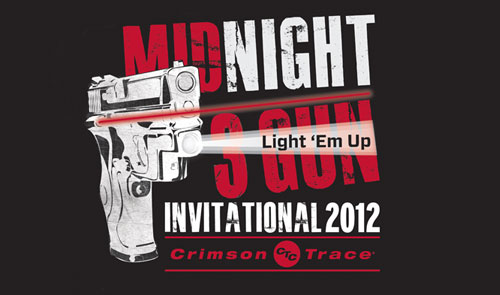 The first and only event of its kind starts Monday with a full roster of shooters, full match schedule and full auto firearms! Shooting entirely at night in the high desert of central Oregon, the Crimson Trace Midnight 3 Gun Invitational is a unique addition to the shooting calendar, featuring night vision equipment, thermal imagers, IR lasers and belt-fed stage guns. When the sun sets on the range, shooters from all over the country will be making ready in anticipation of the eight, challenging stages and the chance to win the $10,000 first prize.

“We’re totally stoked at the response this match has generated,” said Kent Thomas, director of marketing. “Outside of the of military, no one that we’re aware of has put something like this on before and we’re really grateful that the shooting community has embraced it the way they have.” A large number of top-tier sponsors have also joined Crimson Trace in creating this one-of-a-kind competition. Companies based in the Pacific Northwest were quick to throw their hats into the ring, with FLIR, Danner, Leatherman, Leupold, Nosler, BladeTech and Warne providing products for shooters and Range Officers. Local sportswear powerhouse Nike also came on board, the first time they have ever sponsored a shooting event. FNH, Remington, ATK and PWS are providing guns and ammo for use in the exciting courses of fire, which will be covered by TV, print and online media.

The M3GI is open to spectators and is located at the COSSA range on Rte 20, east of Bend, OR.