Considerations when selecting a gun for defensive purposes – Part 1 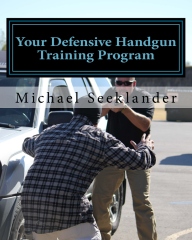 Editor’s Note: This is an excerpt from Mike Seeklander’s new book “Your Defensive Handgun Training Program“.

When selecting a gun for defensive purposes, I use what I call the R.E.A.P. test. This acronym stands for: reliability, ergonomics, accuracy and power. For me, reliability is number one, because in a gunfight, as well as my secondary use for most of my guns (competitions), reliability is very, very important.

One other note before I break down R.E.A.P. into more details, I STRONGLY recommend picking one model of handgun that will meet all of your priorities and needs, and spend your time and money (for ammunition) on that one gun. If you are a very experienced shooter, then you can make the decision to switch back and forth between different guns, but the new shooter should stick to one thing. This will allow you to focus on developing fundamental skills to an advanced level rather than chasing equipment and the newest gun or gimmick.

Remember the saying: “beware of the man with only one gun, for he probably knows how to shoot it.” Here is what you need to look at when selecting a firearm for combative purposes, listed in order of priority:

Reliability.
The number one thing a firearm must do is work. Nothing else matters if you have a malfunction during a fight. Most good production guns should be very reliable out of the box, and with a good gunsmith custom guns should work every time. If they don’t work, get rid of them. You will want to pay particular attention to the ammunition you use, and the magazines you use to feed that ammunition into the gun, because the large majority of malfunctions are indeed caused by faulty ammunition or magazines, NOT the gun. If you know without a doubt that the magazines and ammunition are good, and the gun fails, then it is time to do some trading. Actually, if the gun is a carry gun, do someone a favor and get the gun fixed if possible before trading it, or at least let them know what they are getting so they don’t stake their life on the gun.

How reliable should a gun be? An example would be my current teaching guns the M&P 9, 9C, and the XDM 3.8. These guns are the ones I have used to teach almost every defensive/tactical class I have done over the last 4 years, as well as countless hours of training. The full sized gun finally failed to eject (this may have been an ammunition issue) after 15,000 + rounds and fours years of hard training with very minimal cleaning (I did lubricate it…but did not clean it on purpose). My carry gun, the M&P 9C gets cleaned because it is a carry gun, and with more than 7,000 rounds, has yet to fail. That is my idea of reliability. If you can’t go through numerous training sessions without a malfunction, then your gun is NOT reliable. 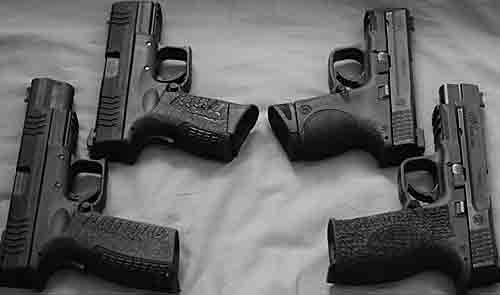 Some great handguns, the XDM made by Springfield (3.8 and 5.25 shown), and the M&P made by Smith and Wesson (9Pro and 9C shown). I really like a line of guns that offers users a full sized gun and a compact or smaller gun with the same ergonomics.

Ergonomics.
The second thing I look for in a firearm is its physical design and ability to be shot well. Generally a gun with a low bore to axis ratio will recover better during recoil because this low axis causes the recoil to travel straight back and through the arm, rather than up. The recoil has to go somewhere, and a well-designed gun will recoil considerably less. The slide lock lever, magazine release, and other manipulation devices should be located in easy to reach and operate spots.

If you purchase any high quality production firearm made by a reputable company, these items won’t be a problem. Ambidextrous operating devices are preferred, and at a minimum the safety, if the gun has one, should be located and operable on both sides of the gun.

If you have a choice, you should select a single action type (or similar such as the triggers you will find on Glocks XDM’s, and S&W M&P’s) trigger design for the first and following shots, as double action triggers just require more work when trying to hit a small target fast on that first shot. Please don’t take this as a knock on any gun type out there, but the simple truth is that a double action type trigger is significantly harder to manage on in situations where you have a high accuracy requirement. While this may be less likely in a defensive situation, having a trigger that is easier to manage could be a big key if you are shooting around family members or friends that you do not want to hit.

Another feature you will find on most modern production guns these days is adjustable or interchangeable grip panels that allow you to modify (very quickly) the guns grip size to fit your hand. I would strongly recommend a gun that offers this feature. Lastly, the single best test of ergonomics is to shoot the gun and try to manipulate it while shooting. You will find noticeable differences in different designs and the gun you can run well is probably the gun you should consider carrying. Don’t carry a gun you can’t operate well!

Accuracy.
Accuracy is third on my list because while it is important, it is not the most important factor since most handgun fights will occur at very close ranges. I do prefer a very accurate gun if I can get the first two requirements (reliability and ergonomics) met as well as accuracy. I am pretty particular about having a carry gun that will shoot as good or better than I am able to shoot it, and with some of the high quality production guns on the market today this is something that is possible to find (one of my current carry guns, a S&W M&P C, shoots as well as I do). Production carry guns should be capable of shooting a group of four to six inches at 25 yards at a minimum, and if they can’t, I suggest you research aftermarket barrels to try to increase accuracy.

Power.
While I am not inclined to get into a stopping power discussion you might see on a .45 versus .40 forum string because it is such a hotly debated subject, I will say that stopping power is something that should be considered. Select a caliber that offers the most stopping power and compromise of controllability you can find. We would all carry .50 caliber handguns if we were able, but there is always a compromise between recoil and the size of the gun versus stopping power. Guns with bigger more powerful bullets (ammunition) are often bigger guns and are harder to carry and conceal. They also recoil more, which isn’t a bad thing if you have the ability to control that recoil.

In terms of stopping power, the human body requires a certain amount of penetration (10-12 inches) for a bullet to affect damage to vital organs via a crushing mechanism and “stop” the threat. In addition, a bullet that is built to cause the most damage and largest temporary and permanent (the most important) wound channel is likely to be more effective than one that does less damage. For me, this is a 9mm or larger, with a good bullet design.

If you are interested in researching this topic as well as finding out how your current carry round (or the one you are thinking about carrying) performs, I strongly recommend you visit and read some of Dr. Gary Roberts material, one such forum currently being M4carbine.net. Dr. Roberts is in my opinion one of the best sources for data in relation to ammunition performance that there is. His material is easy to find, and even easier to understand and apply. Do the research and pick the best caliber you can, so you can spend your time training for better shot placement at faster speeds while others argue about stopping power.

Your Defensive Handgun Training Program  is the most advanced training program you will find with the purpose of training those who might use a handgun for defensive/combative purposes to the highest level possible.  If you have ever wondered what you should be doing on the range while you spend your precious time and ammunition preparing for a lethal encounter, this book will give you the answer. CLICK HERE TO ORDER…