Children and Guns In The Home 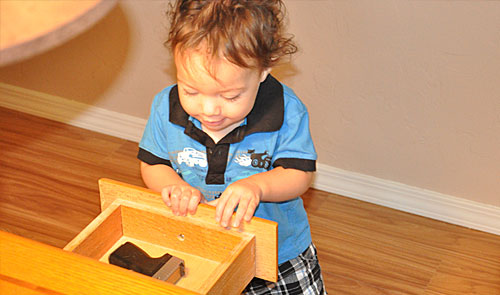 If untrained people live in the home or have access to it (visitors, neighborhood children) all guns must be either secured or controlled.

It happened again, here in Arizona in a nearby town. A father and his four-year-old son were visiting a friend when the boy discovered a pistol hidden under a cushion and fatally shot his father, a Special Forces veteran, in the chest. For all it’s worth, the pistol was a .380 ACP. Nightmarish events like this are repeated all too often. Is there something we, as firearms owners, can do to prevent these tragedies?

The gun control crowd love to use stories like this to illustrate their point that limiting the availability of firearms will save lives while ignoring the fact that guns in the hands of responsible citizens save lives every day. They also insist that all guns should be unloaded and locked up at all times, again ignoring the legitimate need people have to defend themselves and their families. I’m sure you agree that firearms need to be secured and kept out of the hands of irresponsible people, but how do we balance that with self-defense?

I like to address the issue of firearms security on three levels; secured, unsecured and controlled, and relate these security levels to degrees of training. Secured firearms are those that are unloaded and locked in secure storage such as a safe or lock box, or rendered unusable by means of a locking device. Young children and others with no firearms safety and gun-handling training can be presumed to be safe in the presence of secured firearms. I say “presumed” because I assume they don’t have the means to open safes or unlock locks. If they can gain access to functioning firearms and ammunition the guns aren’t secured, they’re unsecured. If untrained people live in the home or have access to it (visitors, neighborhood children) all guns must be either secured or controlled.

Unsecured firearms include hidden guns, guns hanging on the wall or those stored in locations like closets. They might be loaded or unloaded. Remember Rule #1: All guns are always loaded. Assuming any gun you pick up is unloaded is a prescription for disaster – always check and never assume. The problem with unsecured guns is they may be accessible to anyone in the home. Hiding guns from untrained people doesn’t work (see the example above) as anything hidden can be discovered. Did your parents manage to hide anything you couldn’t find when you were a child? I rest my case. Perhaps my earliest childhood memory is the time I dragged a stool across the kitchen floor, opened a closet, climbed up and touched my father’s 1911 pistol hanging from a hook in its shoulder holster. That’s as far as I got before being discovered. Dad’s service weapon disappeared, never to be seen again.

A controlled firearm is one in your personal control at all times. Controlled guns include pistols worn in holsters and firearms attached to your person through purses, slings, and fanny packs, or carried in briefcases or backpacks. The moment you take the gun off or set it down and walk away, the firearm is unsecured. The best way to keep a loaded firearm out of the hands of untrained people but ready for defensive use is to keep it on your person at all times and in your personal control. Controlled firearms pose no danger to children or untrained people as long as you are awake and alert. Some folks who want to keep a defensive firearm handy make this a routine. I know a person who drops a pistol in his pocket as soon as he gets up in the morning and when he puts on a belt gun he transfers the pocket pistol to the off side pocket. I know another gentleman who makes putting on the pistols he always carries a part of getting dressed. I think the best thing is to make up your mind on how you plan to carry and turn it into a habit. An alternative to carrying a firearm is to place the firearm somewhere out of reach and completely unloaded while you carry the only unsecured ammunition in the house. This way, if the firearm is needed, you can load it quickly but no other person can do so. Bear in mind this only works if you do it unfailingly and all the ammunition not on your person and in your control is locked away and completely secured.

Anyone living in or visiting a home containing unsecured firearms needs to be thoroughly trained in firearms safety and safe gun handling. If people cannot be trained, as in the case of small children, the guns must be secured. As an example, since we live alone my wife and I are accustomed to having guns around but we conduct a ritual we call de-gunning the house any time children or other untrained people visit. Our children were trained to be safe around firearms at an early age. Initially we used the National Rifle Association’s Eddie Eagle program, which has taught millions of children to “Stop, don’t touch, leave the area and tell an adult” if they see or find a gun. When they got a little older our children were taught the firearms safety rules and how to check a firearm to see if it was loaded. Later, they went shooting.

The National Shooting Sports Foundation has a program called Project ChildSafe to provide free gunlock safety kits and educational materials. Every gun sold comes with a locking device and firearms safety instructions. Safety training is widely available through the NRA, shooting clubs and ranges, gun stores and many law enforcement agencies. Tragedies involving children and firearms are rare but terrible events and should never happen. With a little effort on the part of all gun owners we can see that they never happen.

Links to the NRA and NSSF programs mentioned in the text are here, along with a link to a Downrange.TV video on firearms safety: