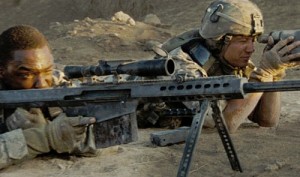 (Murfreesboro, TN) – Barrett is pleased to acknowledge the role played by their semi-automatic M107 .50 BMG rifle in the award-winning movie, The Hurt Locker. Directed and produced by Kathryn Bigelow, The Hurt Locker was nominated for 9 Academy Awards and the winner of many others.

This movie takes on the subject of the American soldier in the Global War On Terror. In this film the Barrett M107 is prominently featured when a U.S. Army EOD unit uses it as a counter-sniper weapon accurately penetrating concrete walls in excess of 800 meters.

Barrett is proud of the role our rifle plays in this movie, but is even more proud of the role our products play in real life while in the hands of Soldiers, Marines, and Airmen around the world. The Barrett M107® is in use with EOD units as a tool for long-range detonation, but is also used by law enforcement agencies and militaries around the world for counter-sniper activities, barricade penetration, vehicle stoppage, and much more.