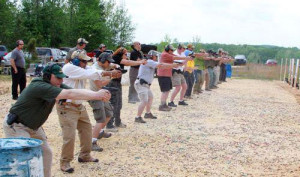 More and more students are signing up for more and more courses. As the industry grows, so does our need for Professional Defensive Shooting Instructors.

The number of people buying defensive firearms and the number of them seeking out training and Concealed Carry Permits are continuing to rise. Concurrently, the private sector training industry has never been busier and is also growing quickly. More and more ranges are hosting courses and allowing their members to practice progressively. New Instructors are joining our ranks every day. These are all GREAT Things. As I speak with my peers in the industry about the ‘good times’, though, one thing that is often lamented is the lack of “standards” among instructors. Thankfully, most of the focus is not on actual technique or doctrinal standards, but on standards of professionalism, safety and business practices. One of the great things about the current state of affairs is the great variety in doctrines, methods and techniques that can be learned from the many professionals actively teaching defensive shooting.  This variety, and the differences in what is being taught, leads to the examination and critical thinking that are necessary for evolution and improvement. Sometimes, however, those differences go beyond the hard skills and bleed into areas that can cause a lot of heartburn. Areas like safety. Areas like the justification for why certain techniques are taught. Areas that often fall under the umbrella of Professionalism.

If you ask a room full of people what “professionalism” means, you’ll get a lot of different answers… trust me, I’ve done it several times! Words that are often heard include: Integrity, Knowledge, Expert, Dedication, Honor, Ethics & Standards. Recurring themes include: Attitudes, The “way one conducts oneself” and Respect for (and from) Peers & Students.

Over the past several months, I’ve engaged many training industry professionals in a dialogue to move towards a clearer understanding, both for us and our students, of exactly what a Professional Defensive Shooting Instructor is or how they conduct themselves. These conversations have taken place on the phone, via email, on a few ranges, in a at least a few bars, at a meeting held at SHOT Show and, most recently, during a presentation I gave on “Instructor Development & Professionalism” at The Rangemaster Tactical Conference in Memphis, TN. There were 40-50 people at the presentation and almost all of them were instructors. Some of their names you would recognize and I consider mentors and trailblazers, others have not had their 100th student yet and I might not even recognize if I see them next week. During that presentation, we engaged in a bit of a discussion about the concept of “professionalism” and I proposed seven tenets that are the result of the last several months of interaction. By no means are these tenets my own creation, hatched in a dark study and delivered down from a pedestal. These are the ideals I strive for, certainly not ones I claim to have always met. They have grown from three bullet points that started in an email thread between myself, Grant Cunningham and Omari Broussard, two very different firearms instructors who are equally excellent and passionately interested in progress and professional development. Those bullet points were re-written, shared, discussed, changed, added to, taken away from and reviewed by too many other contributors to list here. The list includes names like Robbie Barkman, John Farnam and Marty Hayes, guys who have been involved in the industry since its earliest days and guys like Chris Collins, who have only recently become recognized names amongst the firearms community.  All of those contributors and contributions evolved the idea of a Professional Defensive Shooting Instructor’s Code into the list of tenets that I presented last week and that are included at the end of this article.

As these conversations have been going on, it became apparent that the first thing that might need to be established for some people is that there is such a thing as a “Defensive Shooting Instructor” in the first place… as opposed to just a generic “shooting instructor”.  I think it is imperative, as we move forward, to distinguish the group of people, the area of study and the gear appropriate for Defensive Shooting. Just as you wouldn’t show up to a skeet shooting event with a .308 rifle and expect to talk with others about mil-dots versus duplex reticles, we should be able to differentiate between the person who teaches hunter safety, target shooting or competition techniques from those who teach life & death skills meant for a very specific context of use. Similarly, there are differences between much of the gear and the techniques that make the most sense if you are trying to win competitions and the things that make the most sense to a Defensive Shooting Instructor. Once that is established, we can move on to trying to figure out exactly what that person does and how they do it.

Of course, what we actually do… the doctrine, the techniques, the skills themselves… will never be standardized. I believe it would be a fool’s quest to try to establish standards for what is taught under the banner of Defensive Shooting. In fact, I even disagree with those who have proposed that we should have universal standards for safety related issues such as student-to-instructor ratios and whether or not it is okay let students shoot & move on an imperfect range surface. I also disagree with those who would say that things like using foul language or dressing in any particular way immediately mark you as “unprofessional”. I do, however, believe that there are some much less objective things that we should be able to agree on. I believe that there are some fundamental things that anyone engaging in this trade should be able to support. Those things are represented in the tenets ,. Those things are subjective… they are conceptual. To echo the words that I have often heard people use to describe and define “Professionalism”, they indicate that a person has Integrity, Knowledge, Ethics, Dedication and Standards. They indicate that a person is interested in the ideas of Attitude, Respect and Evolution. They indicate that a person is very aware of how they conduct themselves and their courses. These, to me, are all hallmarks of Professionalism. 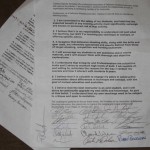 Copies of "The Tenets" that were passed around and signed at SHOT and at the Rangemaster Conference.

Over the past several weeks, these tenets have been presented to many instructors. Overwhelmingly, they have responded with “Where do I Sign?”… and, in fact, at both SHOT Show and the Rangemaster Conference many instructors actually did sign a copy of the tenets that was being passed around. All of their names, as well as a handful of others who have specifically expressed their support in writing, are listed below.

So, whether you are an instructor or a student… or just an interested observer connected to the firearms industry… take a look at these tenets. Please share them in their entirety wherever you see fit, electronically or otherwise, attribute them to the Association of Defensive Shooting Instructors.

And, if you are interested in being on the list of those who support this code, send me an email.

1. I am committed to the safety of my students, and hold that the expected benefit of any training activity must significantly outweigh any known or perceived risk of that activity.

2. I believe that it is my responsibility to understand not just what I’m teaching, but WHY I’m teaching any technique or concept, or offering specific advice.

3. I recognize that defensive shooting skills, along with the drills and gear used, are inherently specialized and usually distinct from those of target shooting, competition and hunting endeavors.

4. I will encourage my students to ask questions about course material, and I will answer them with thorough and objective explanations.

5. I understand that Integrity and Professionalism are subjective traits and I strive to maintain high levels of both. I am capable of, and willing to, articulate the reasons for the way I conduct my courses and how I interact with students & peers.

6. I believe that it is valuable to engage my peers in constructive conversation about differences in technique and concept, with the goal of mutual education and evolution.

7. I believe that the best instructor is an avid student, and I will strive to continually upgrade my own skills and knowledge. As part of this belief, I understand that my own teachings need to be subject to critique and open to evolution. 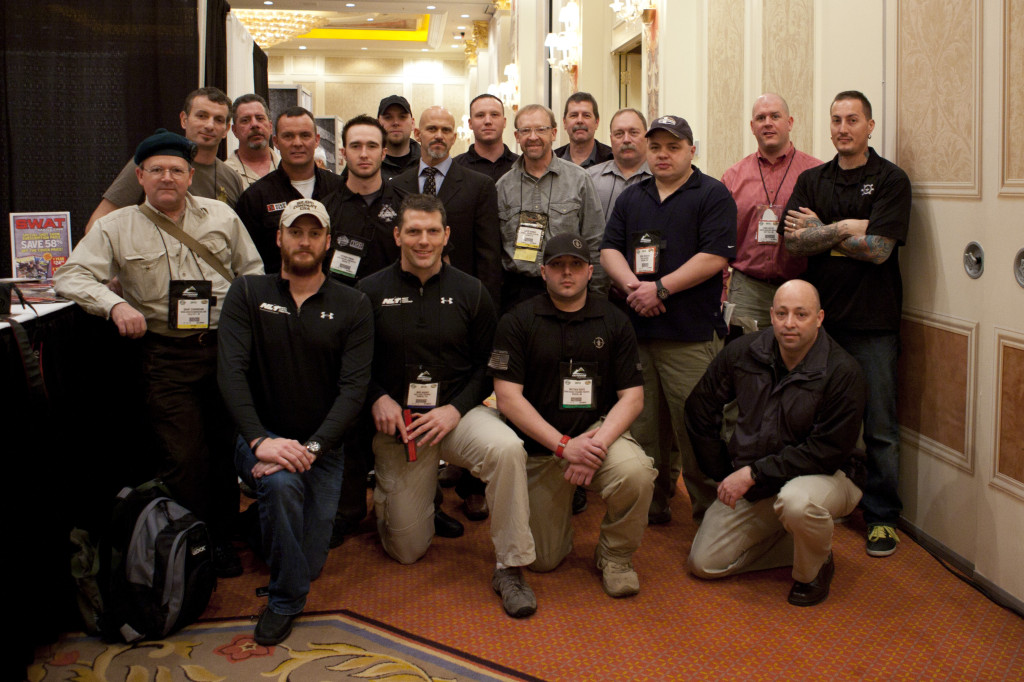 2 Responses to A Code for Professional Defensive Shooting Instructors