Revolvers are making a comeback! 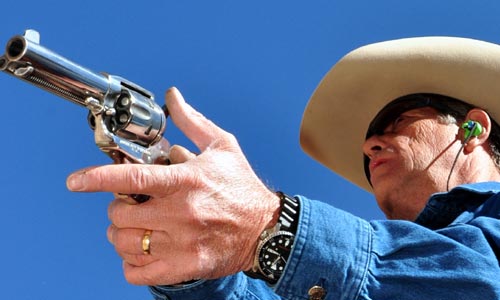 From the Ruger S.A. Defensive Revolver Class in May 2009. Photo Credit: Ron Canfield

October is usually our busiest month of the year at Gunsite, and this October was no exception. We had a full schedule of regular classes, military classes and, of course, the GAS Match, our annual family get-together. This time of year we also experience our very best training weather. It’s cool in the mornings and sunny and warm, without being too hot, in the afternoons. This great weather is going to be around for awhile, so come shoot with us if you can.

If what we are seeing here at the school is any indication, revolvers are making something of a comeback. Although most of us older shooters started on revolvers and then transitioned into self loading pistols, there are many shooters out there these days who are doing things “backwards”; as in, they started on the semi-autos and are now learning about revolvers. That being said, I thought we should spend a little time talking about revolvers in this newsletter. First, as to training, there is no reason not to take a regular Gunsite pistol class with a revolver. But, if you want a revolver specific class we have Defensive Revolver, a three day class. We will be running DR May 10-12 and July 7-9 next year. And for those who enjoy the single action revolvers, we even have a single action version of defensive revolver and it runs May 3-5.

One of the issues I would like to address with revolvers has to do with the way they should be gripped for firing. You might think that the grip for one handgun will work just as well for another, but that may not be the case. If you happen to be one of the folks who got started on semi-autos, and you were taught a thumbs forward Isosceles grip you are going to have to make some adjustments when shooting a revolver, especially a powerful one with full loads. When using the “thumbs forward” grip you may find that your support side thumb is in line with, or forward of, the barrel cylinder gap. This is the area from the front of the cylinder to the rear of the barrel forcing cone…a tiny gap out of which some very hot gasses escape. If your thumb and these gases come together you are going to experience some discomfort. Even worse, with something like a Magnum revolver, you may actually experience injury up to and including partial amputation of your digit. So, before torching off that revolver, make sure you do not have any body parts that could be injured by the escape of those hot gases from the barrel cylinder gap.

When teaching the revolver I often make reference to some older texts with some very good revolver information, in particular, and excellent shooting information in general. All of these books are currently available at www.amazon.com, as well as other sources. The first is Fast and Fancy Revolver Shooting by Ed McGivern. Back in the 1930s and 40s McGivern was the best exhibition handgun shooter in the world. But, aside from his exhibition skills, McGivern really studied and analyzed shooting and laid the foundation for modern police handgun training. Any serious student of shooting should read his book. McGivern was able to accomplish things like shooting a can tossed into the air 6 times before it hit the ground, and emptying a six shot revolver into a small target in less then a second.

Next is Sixguns by Elmer Keith. Keith was a hunter, handloader and writer who is probably best known as the father of the S&W Magnum calibers, to include the .357 and the .44, and he also had a hand in the development of the .41 Magnum. His book came out in about 1955 and it is still the definitive reference on revolvers, especially the Magnum series. Keith includes information on handgun hunting, load development, and has some pretty good old-timer gunfight stories.

Lastly, we have No Second Place Winner by Bill Jordan. Written in about 1965 by a Border Patrol gunfighter and exhibition shooter, Jordan’s book was the first of the modern era written about gunfighting techniques and gear. Even though it deals primarily with the fighting revolver, this is an essential book on how to win gunfights with a handgun. This book includes an astonishing series of pictures showing Jordan, in dress uniform duty gear, pulling off a draw, with a hit, in about ¼ of a second, including reaction time.

4 Responses to Revolvers are making a comeback!