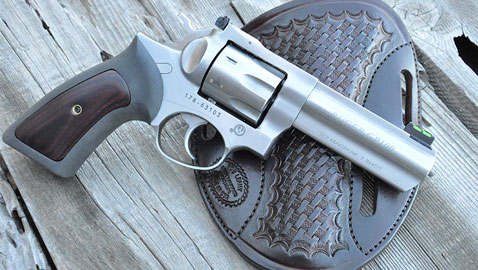 Who needs a seven shot .357 Magnum revolver? A lot of people, as far as I can tell. Everyone I’ve shown the new Ruger GP100 seven-shooter wants one and now that Ruger has them with 2.5”, 4.20” and 6” barrels it looks like there will be a model for everyone.  Revolvers are accurate, powerful and easy to understand and shoot. Versatility is a hallmark of .357 Magnum revolvers as they can shoot a huge variety of both .38 Special and .357 Magnum ammunition suited to every purpose from target shooting to defense and hunting. I would wager there is more ammunition available in more varieties for .38/.357 revolvers than for any other handgun round. 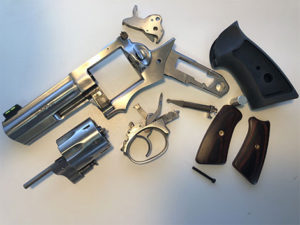 So how did we arrive at this particular GP100? That story starts in 1986 when the GP100 was introduced. Ruger was highly successful with their Security Six lineup of medium frame revolvers that were about the same size as the Smith & Wesson K-frames. The Security Six competed with the Smith Model 19 and 66 and gained a reputation for being robust and easier to maintain. We issued both during my Border Patrol tenure, and while the Smiths were viewed as more elegant the Rugers were seen as more durable. In terms of maintenance the Ruger was the hands down winner. Whereas the Smiths required screwdrivers of the proper size and a fair degree of knowledge, the Rugers could be taken down with anything – even a nail – and could be serviced by anyone after a couple of minutes of instruction.

Eventually the law enforcement world reached a consensus and determined the K-frame Smiths and medium frame Rugers weren’t strong enough for a steady diet of hot .357 Magnum ammunition. Considering most every department practiced and qualified with .38 Special target ammunition and actually fired very few Magnums through their revolvers I’m not sure how this conclusion was reached, but in any event it resulted in two of the best .357 Magnum revolvers of all time, the medium-large  L-frame Smith 586 and 686 and the Ruger GP100 of almost identical proportions. As with the earlier revolvers the Ruger is easier to take down and maintain and is considered a bit stronger than the S&W but the fact remains they were and are excellent revolvers.

While there are numerous GP100 variations the one that’s been missing is a 7 shot cylinder model. Up until now Smith & Wesson has owned this share of the market so I suppose Ruger decided to get in on the act and make not one, but three (so far), variations for their loyal customers. The revolver I have at hand is the first of these to be introduced and it has the 4.20” barrel. As well, it sports the original GP100 rubber stocks with the rosewood inserts Ruger fans have been clamoring for. The rear sight is the usual white outline adjustable model with the tiny slot windage screw. Do yourself a favor if you have adjustable sight Rugers and go to www.shopruger.com and get the screwdriver kit I designed made up of Brownells parts. And speaking of Brownells, they stock replacement sights, speed loaders and just about anything you could want for your GP100 and many, many other guns. 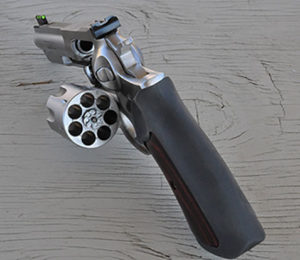 The front sight is a green fiber optic held in place by a spring and detent. This is the best front sight system ever as sights can be easily replaced if damaged or should you wish to switch to another style or color. Again, go to ShopRuger. Dimensionally, the revolver appears to be the same size as the 6-shot GP100. The fluted cylinder is the same diameter and speed loaders for the S&W 686 + revolvers will work in the Ruger cylinder. The revolver weighs a hefty 40 ounces empty and my Lyman electronic trigger pull tester gizmo says the single action trigger breaks at 4.5 pounds while the double action pull is about 12 pounds. The trigger feels a bit stiff and a bit gritty to me but that’s okay because it is very usable as is and can be easily cleaned up and brought to perfection. By the way, back in the dark ages we used to have to cut down and smooth target triggers to turn them into suitable smooth, double action gunfighter triggers. After a time the manufacturers figured this out and I’m happy to report the GP100 has a perfectly shaped, smooth trigger for good double action shooting. 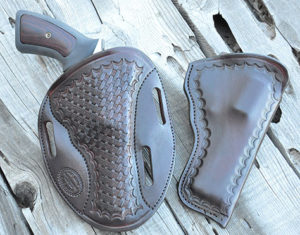 Stopping by Simply Rugged Holsters I took a few pictures of their beautiful holsters for the GP. Rob and his crew would be happy to make you anything from a plain holster to one stamped or carved and with exotic skins like stingray, alligator, Cape buffalo or rattlesnake. Highly recommended, high quality gunleather.

The Ruger proved to be exactly as I expected when I took it to Gunsite’s North Range for testing. Shooting at a steel target at 25 yards I was able to keep every round of .38 Special and .357 Magnum defensive ammunition on the plate. I really appreciate the sight picture I get with the green fiber optic front sight; it’s easy to see and there is enough daylight on either side of the sight when viewed through the rear sight to assure proper alignment. The sights were perfectly regulated and I found no need to adjust them. The revolver is pleasant to shoot with any .38 Special loads, including hot +P defensive fodder, and anywhere from reasonably comfortable to a bit on the uncomfortable side when firing  .357 ammunition. Like we did in the Border Patrol, I rather imagine folks will do most of their shooting with .38 Special ammunition while reserving the hottest Magnum stuff for “serious social purposes.”

If you would like to have a high quality .357 Magnum revolver that will last for generations you should consider the Ruger GP100. It’s available in several variations at your local emporium and these revolvers, like the ones my compadres and I carried, will “do to ride the river with.”