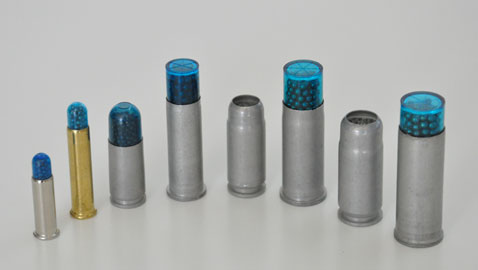 When the subject of handgun shot loads comes up the question that follows is: Do you recommend them for defensive use? In my experience people hit with these loads make great haste in vacating the premises. As I’m fond of saying, people don’t like getting shot – with anything. Most authorities on the subject of defensive ammunition don’t recommend using shot shells because they aren’t likely to cause fatal wounds, but if the idea of shooting someone is to make them go away and stop doing evil things maybe shot shells have some merit. Shot shells can work on animals as well. A person I know was out in the boonies recently when he was confronted by a black bear. Because he took the precaution of wearing his 1911 pistol he was prepared to deal with the threat. Quickly drawing and firing, he hit the bear square in the chest and only then remembered he had loaded a shot shell in the chamber because he anticipated running into a rattlesnake, not a bear. In any case, it worked out well because the bear immediately lost interest and was last seen leaving the territory mas rapido.

It’s high snake season here in Arizona as I write and it seems everyone I know has had a recent snake encounter. A few examples:

A friend encountered a rattlesnake while walking to her horse stall. A single shot from a .410 shotgun took the head off the snake.

A lady rancher ran into three rattlesnakes, two western Diamondbacks and one Mojave. While emptying her pistol on the Diamondbacks the Mojave came after her. Call it a charge or an attack, Mojaves have a mean disposition. I’ve seen them go after people several times and it’s happened to me twice.

Two friends lost dogs to rattlesnakes this year. If you have dogs and live in snake country I urge you to look into rattlesnake avoidance training for your pets.

A couple opening a ranch gate found a rattlesnake blocking the way. A .22 took care of the problem.

So, on to the subject at hand, CCI’s line of shot shells intended primarily for use in handguns and most commonly used to shoot snakes and pests. It took some time and searching but I finally got my hands on all the shot shells in the CCI lineup from .22 Long Rifle to .45 Colt. Along the way I heard a lot of rumors from store clerks, folks on social media and other shooters concerning the availability of hard-to-find shot shells. I was told CCI had stopped making them altogether, had stopped making certain calibers or only made them from time to time. To get to the bottom of this I tapped a source within the company who told me shot shells are not in high demand and, with some ammo in short supply, the company is concentrating on catching up on ammunition most requested by shooters. Shot shells remain in production and CCI hopes to get caught up while planning on introducing new products in the shot shell lineup. If you’re looking to buy shot shells my advice is to buy them when they are available as we wait for the market to stabilize and for supply to catch up with demand.

There are a lot of ways to test the various shot shells but lacking a bucket of rattlesnakes I settled for shooting patterns at snake shooting distance – about 6 feet – with pistols typical of those you might use for the purpose. Here’s what I found. 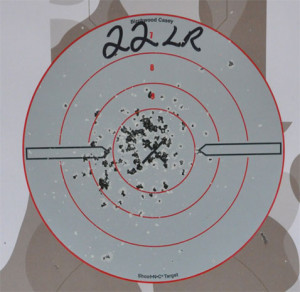 22LR:  The .22 shot shells hold 31 grains of #12 shot. A small payload of fine shot is marginally effective on snakes in my experience and usually takes several shots. Especially when used in a rifle, the .22LR shot loads are useful indoors, like in a barn or a garage, where they will take out pests like pigeons, rats, mice and snakes yet do little damage to the structure. Firearm: Ruger Bearcat revolver. 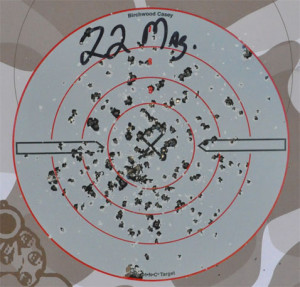 22 Magnum:  The Magnum .22 load also uses #12 shot but the payload is almost twice as big as the .22LR at 52 grains. The .22 Magnum load works great in small revolvers like the Ruger LCR and is more effective on critters than the lighter .22 load. Firearm: Ruger LCR revolver. 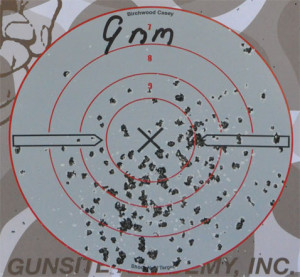 9mm Luger:  The 9mm is the only centerfire shot shell round to use a payload of #12 shot. At 53 grains it is almost identical to the .22 Magnum and produced similar patterns in my testing. Firearm: Bond Arms derringer. 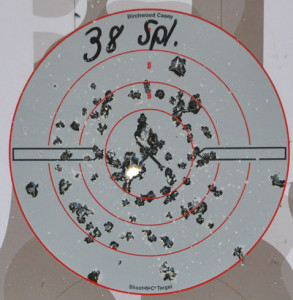 .38 Special:  The .38 Special shot shell is the one I have the most experience with. It carries a payload of 100 grains of #9 shot, is effective on snakes and small game and may be useful in persuading certain people to change their behavior, or so I have heard. The .38 shot shells have probably caused the demise of more snakes than all the other loads combined. Firearm: Ruger LCRx revolver. 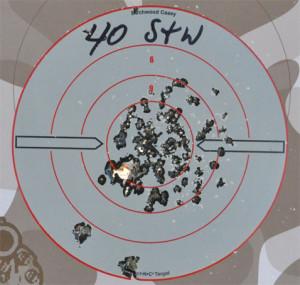 .40 S&W:  With a smaller 88 grain charge of #9 shot the .40 S&W load is probably only slightly less effective than the .38 Special loading. I say probably because I have no experience shooting anything but paper with the .40 S&W shot shell. Like all the shot shells designed for semi-automatic pistols, it’s important to make sure the ammunition will cycle through your pistol. Firearm: Glock 22C pistol. 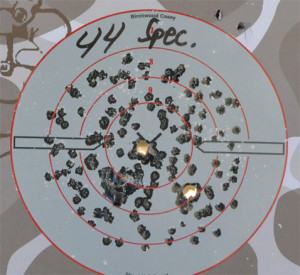 .44 Special:  The big bore shot shell loadings hold a lot more shot than the smaller loads and the results are obvious whether you’re shooting paper or critters. Eclipsed only by the .45 Colt, the .44 Special shot capsule contains 140 grains of #9 shot and produces a large, even pattern. Firearm: Ruger Blackhawk revolver. 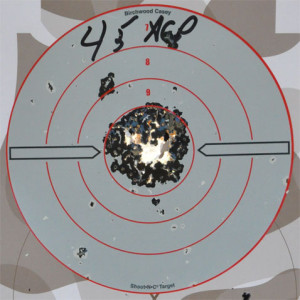 .45 ACP:  My all time favorite shot load, the .45 ACP shot shell holds 120 grains of #9 shot and produces a tight, dense, devastating pattern that gets the job done with one shot. As always, when shooting either ball or shot loads at very close range, I’ve found it best to hold a little low – like a six o’clock hold. Especially with the .45 ACP shot shell, you have to remember to aim carefully because it throws such a tight pattern. Firearm: Sig 320 pistol. 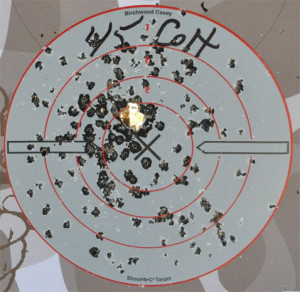 So there you have it. Shot shells may be hard to find right now but they aren’t going away. If you go armed in snake country, and I think you should, keep some CCI shot shells handy and stay alert.